“Coffee is a language in itself.”—Jackie Chan

It looked charming from the outside. I had been told that it served delicious coffee. 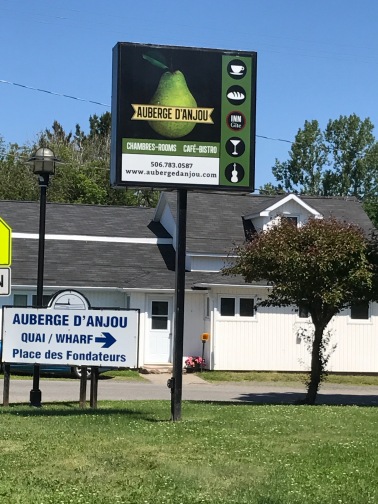 “The two-mile walk required to get here had better be worth the effort,” was all I could think as John and I entered through the beaded front entry. 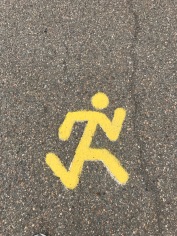 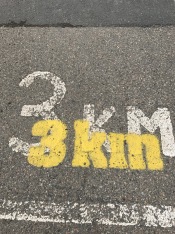 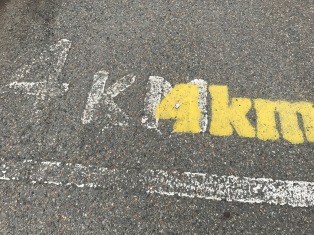 The scent was heavenly. I was feeling hopeful. Several staff members warmly greeted us in French.

As my husband and I ordered our drinks, mocha for me, plain black coffee for him, I took in the environment. Beautiful and original artwork was tastefully hung throughout the dining area. A piano stood off in a corner area. Tables were arranged thoughtfully.  I noticed a bar area, not in use at the time, was located across from the counter in which food/drinks were ordered.

On my right was a chalkboard menu written in French.  Additionally,  there was also another menu to my left.  In front of me, below the cash register, was a glass case filled with a yummy array of foods–salads, yogurt parfaits, single-serving cakes, mini-pies, slices of quiche, muffins, and so forth. 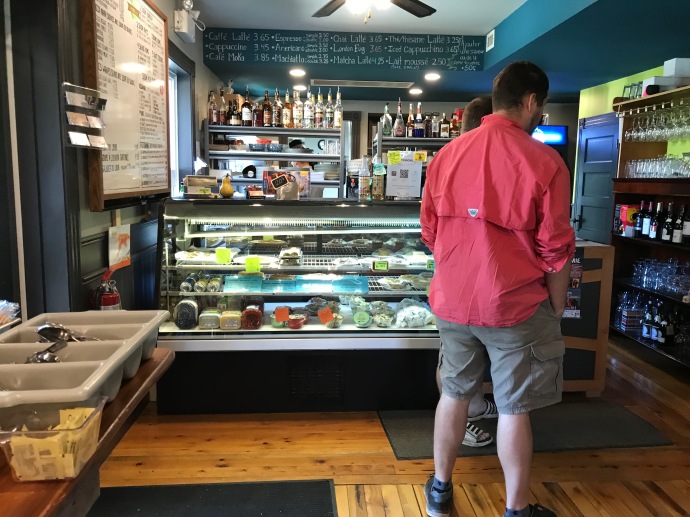 The young man taking our order from behind the counter, Sebastian, was courteous and quickly switched to speaking English when he realized that we were Americans on vacation and, unfortunately, could not speak French.  In fact, Sebastian began to ask us numerous questions that were genuinely curious. What brought us to New Brunswick? Was this our first time visiting Auberge D’Anjou? Did we like Petit-Rocher? He was most engaging and encouraged us to come visit the café often. In the meantime, he told us to choose where we would like to sit, and he would bring us our coffees when it was ready.

John and I chose seats on the wrap-around veranda. It was a delightful day.  The bluebird sky had captured a few billowy-white clouds. There was a light breeze, and the temperature was quite comfortable, somewhere in the low 70s.   A few other diners were also outside; however, we were there at an in-between mealtime, so there were not many. 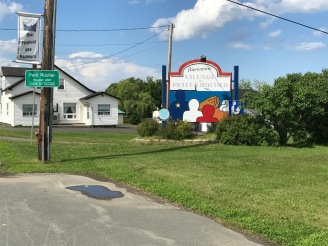 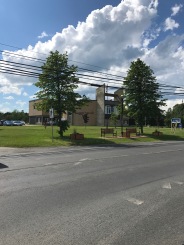 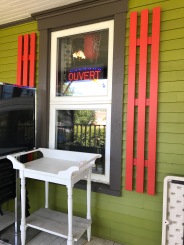 Momentarily, Sebastian served us our coffees—each cup freshly made. No cardboard cups and with plastic lids here. Rather, our coffees were served in beautiful, boldly colored mugs that begged for fingers to wrap around them.

My mocha was truly a work of art. Never before had I ever experienced coffee so caringly created and served. I almost felt guilty attempting to sip it, so I waited a moment in order to savor and appreciate the craftwork of the barista.   Later, to my surprise, she apologized for the mocha not turning out as beautifully as she had hoped! PLEEEEASE!!! 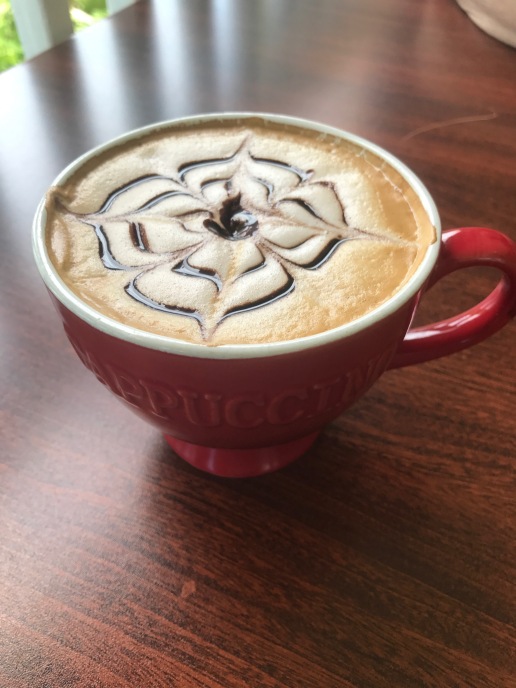 John and I sat, sipped our coffee, enjoyed quiet conversation, and soaked up what was shaping up to be a picture-perfect day. Sebastian appeared several times to check on us as well as answer any question we threw at him. When our coffee cups were finally empty, and the caffeine had fully kicked in, John and I continued on our walk around the harbor area of Petit-Rocher—just behind Auberge D’Anjou. In the end, John and I ultimately walked a total of five miles through this quaint, dear town. 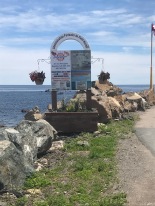 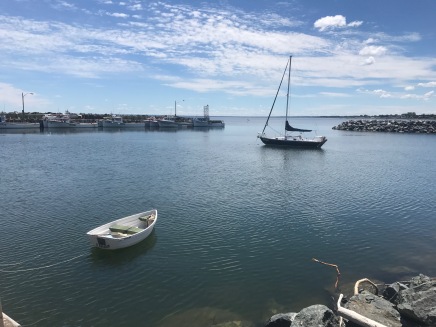 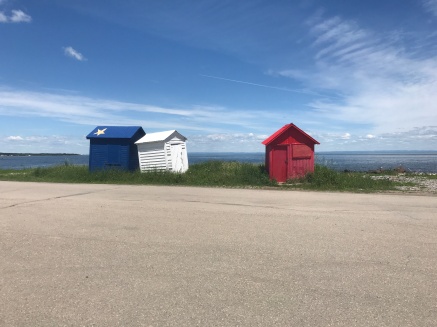 Due to this positive experience, I returned, solo, to Auberge D’Anjou two more times during our stay in Petit-Rocher. Both times, I walked to and from the Café soaking in the French atmosphere and charming surroundings of Petit-Rocher. Also, I made it a point to try two different coffees: Cappuccino and a Latte. Much to my pleasant surprise, both of these coffees were just as tasty as my first mocha. Furthermore, both were created so picturesquely, I forced myself, once again,  to sit and savor their image before I began consuming the contents of my mug. 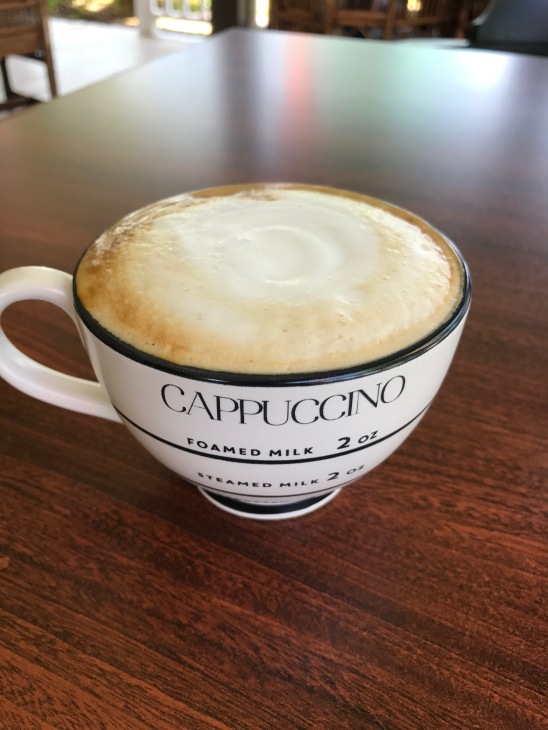 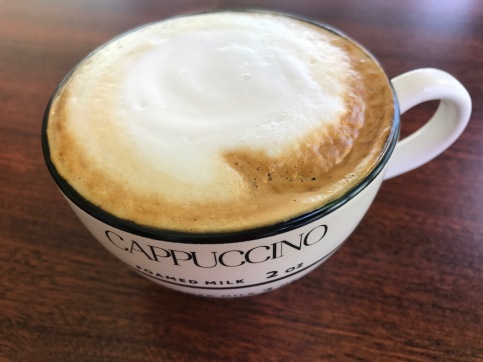 I had hoped to return one evening for dinner as one staff member, Sole, shared the fact that if I would call in advance, the kitchen would prepare a spectacular gluten-free entree, salad, and dessert—just for me. With great detail, Sole described several dinner delights that sounding mouth-wateringly tasty. Unfortunately, it did not work out, and I sadly never made it for dinner. That said, given my positive experience with the care to which the staff pours (pun-intended) into their coffee, I could only imagine how wonderful their food must be. 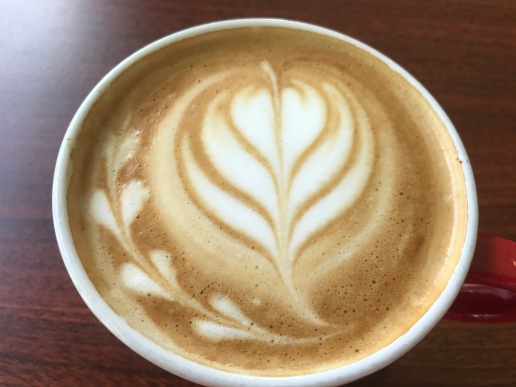 Therefore, if you are visiting, vacationing, or happen to live near Petit-Rocher, I highly recommend a visit to Auberge D’Anjou. Additionally, they also happen to be an Inn, making it a convenient place to stay and eat! Auberge D’Anjou is centrally located in the heart of town and is only one block away from the Petit-Rocher harbor area. If you stop in, tell them Steph simply sent you! 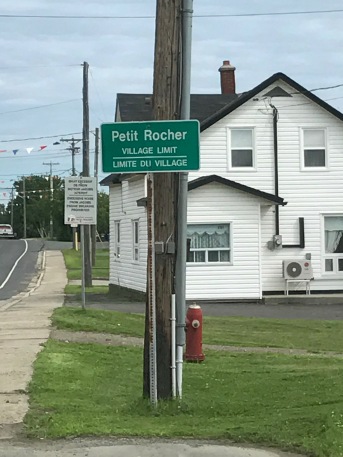