“Every day may not be good, but there’s something good in every day.”—Alice Morse Earle

Recently, my sixth grade students and I were discussing events from their assigned reading of a chapter in a book, Touching Spirit Bear by Ben Mikaelsen. Cole Matthews, the main character, had been convicted for beating another boy who informed on him with the police.  The character of Cole is a stereotypic bully who blames his bad behavior on his alcoholic dad who verbally and physically abuses him and his mother who overlooks the dad’s behavior. 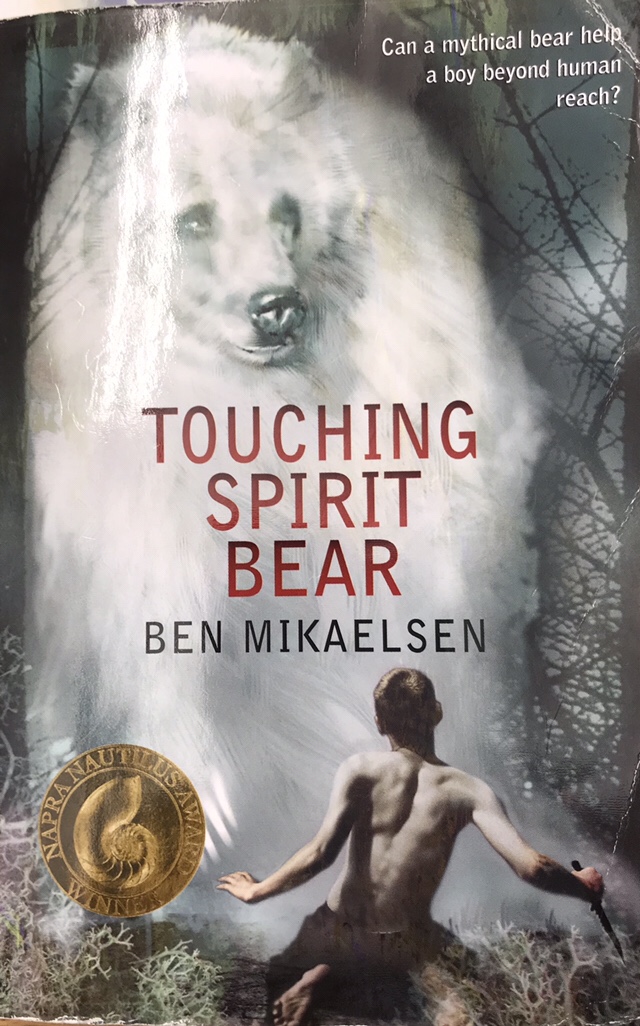 His parole officer, on a visit with Cole in a detention center, brings a grocery bag full of ingredients used to make a molasses cake, such as baking soda, eggs, flour, salt, etc., and asks Cole to try each ingredient separately.  Cole, not wanting to seem weak, takes big bites of each individual ingredient, including a raw egg.  When Garvey asks Cole how the separate ingredients tasted, Cole naturally answers that they tasted terrible.

Next, Garvey offers Cole a piece of the actual molasses cake that he had baked.  Upon tasting the cake, Cole proclaimed the cake tasted good.  Then Garvey brings his object lesson full circle by asking Cole which “bitter tasting” ingredient should have been left out.

I have read and reread this book over the years with my students, and there are many noteworthy passages that make great object lessons for sixth graders.  However, for some reason, thoughts of this passage replayed through my head like an earworm line of a pop song or commercial jingle on the night my husband, John, and I returned from taking our daughter, Madelyn, to Bethany College for her second year.  Clearly, Divine Providence had a lesson to teach me.

Maddie had packed up as many of her personal effects as her compact car could hold and left in the early hours of Tuesday morning to drive Bethany for stage one of her move-in.  I tried hard not to be too emotional as she left, but my throat and heart-space filled repeatedly throughout the morning with a choking feeling as I restrained tears.  Additionally, I spent the rest of the week feeling that eye-blurring, heart-tugging emotion each time I thought of her or walked past her empty bedroom even though I knew she was doing what she needed to do.

Meanwhile, the hallway was lined with larger tubs, boxes, bags, and random oddities for John and me to take to her at week’s end. Additionally, she left a list on our dining room table of supplies for me to gather and add the hall.  Furthermore, she texted several more additional items that were not on the original list. 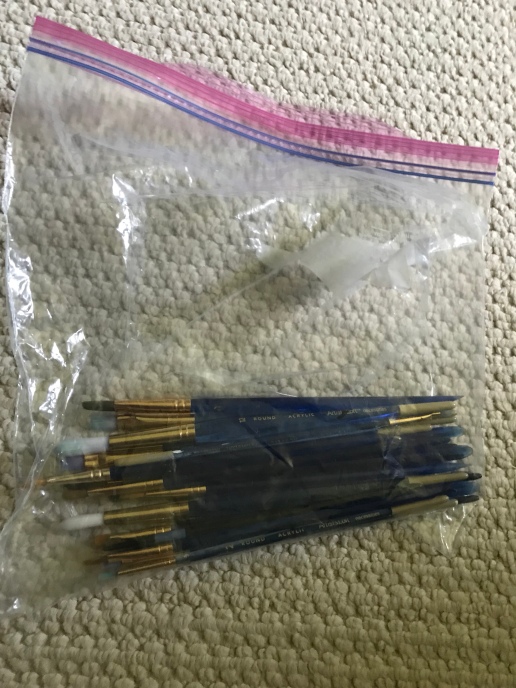 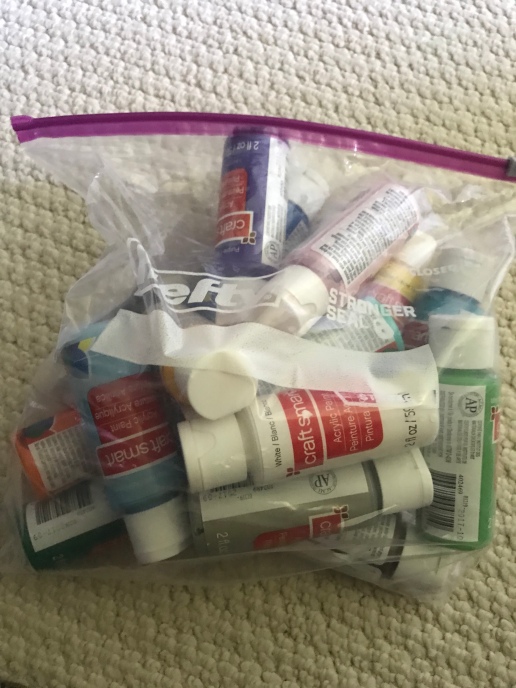 A few more items were added to the list, such as finding/gathering paint supplies for an art class.

While all of this sounds so simple on paper, John and I have been back to work as teachers at St. Joseph Catholic School since the second week of August.  Like all working parents know, there are numerous responsibilities outside of the work day that also require a certain expenditure of energy.  Add to that equation the fact that we are not the spring chickens we used to be, and well, quite frankly, our personal fatigue and emotional recovery isn’t what it used to be.

Nonetheless, I gathered all of the items for which Maddie asked on Thursday evening, so John could load the car.  I felt a nagging annoyance of being asked to search down and gather items that Maddie had not taken time to do before she left. Additionally, I knew John’s back would be throbbing from sitting on a riding lawn mower for hours, which fires up his bulging disc (we have 2-3 acres that he mows), before he even began to carry the heavy tubs and bags to our car.  However, my mom, in a phone conversation that I initiated as I hunted and gathered more supplies, reminded me of all that my dad and she went through to get me to and from Ohio University in Athens.  Hmm . . . 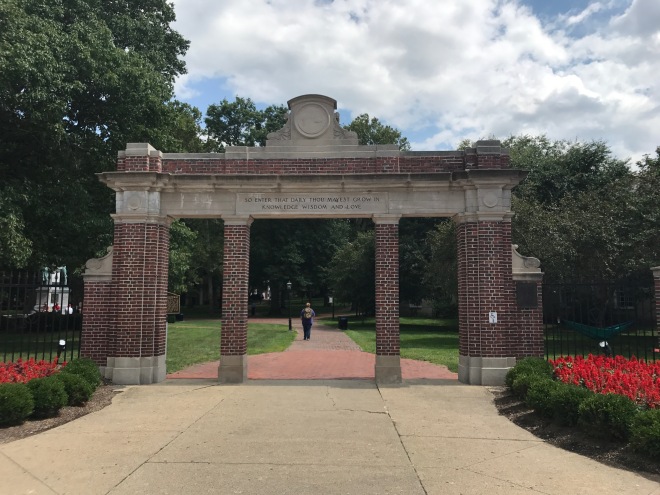 How many times did I pass under this entrance to College Green. 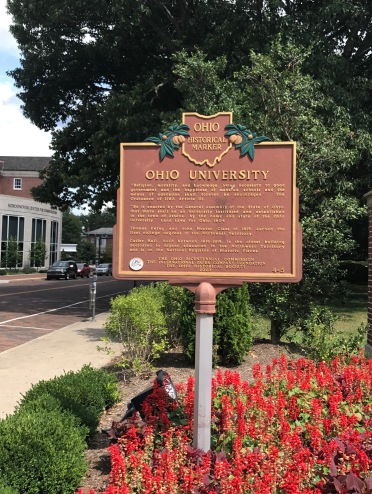 The next day, by the time we worked a full day with 95 middle school kids on Friday and began the four-hour drive to Bethany, well, we were tuckered out.  As John drove, we battled staying awake, and I secretly wondered how on earth I would overcome the eventual carsickness that comes with the curvy mountain roads of the Wheeling/Bethany, WV region.  Furthermore, how would we both have the energy for a late night dinner with Maddie, parents of one her Bethany friends, as well as a couple of other friends?  Plus, once the dinner and 30-minute drive back down the mountain to the hotel was over, how would we find even more energy for the next day’s back-straining move?

As I write this, I feel heat rising to my own cheeks and tears welling once more.  All I can think is:  selfish, selfish, selfish as well as so many unnecessary worries.  To be certain, I had tasted a few of life’s bitter ingredients, such as the drain of emotional separation from my child, the real fatigue of a life inside and outside of work, as well as carsickness. But what I was forgetting was the sweetness of it all mixed together.

My husband and I are fortunate enough to work jobs that allow us the weekend off in order to move the rest of daughter’s supplies.  Both her car and our car transported us safely to the Wheeling/Bethany area.  We could afford to stay in hotel in order to rest for the night.  Maddie’s friend’s parents, Amy and Keith, welcomed us into their home as if we were one of the family and shared with us a spectacularly prepared meal. We spent a delightful Friday evening with the two of them alongside Maddie and two more of her friends. 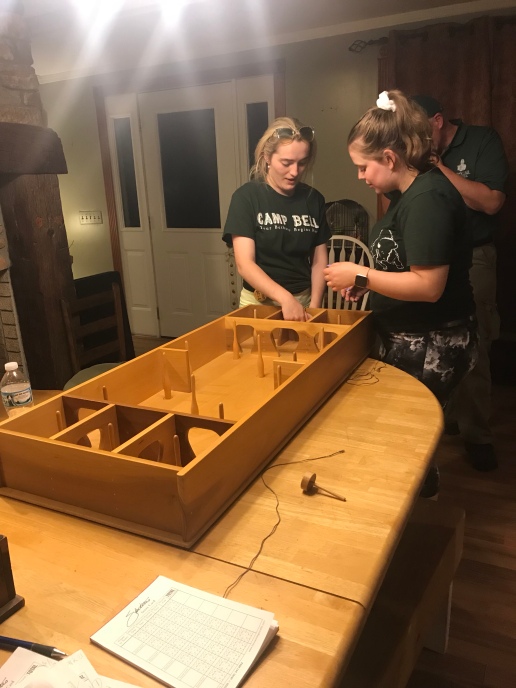 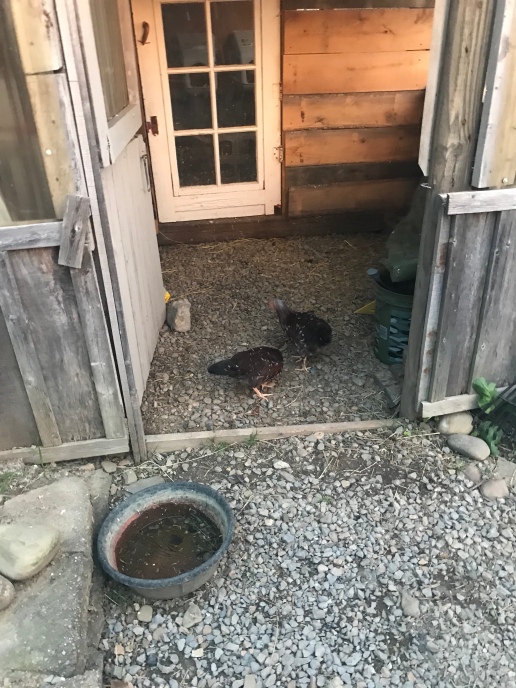 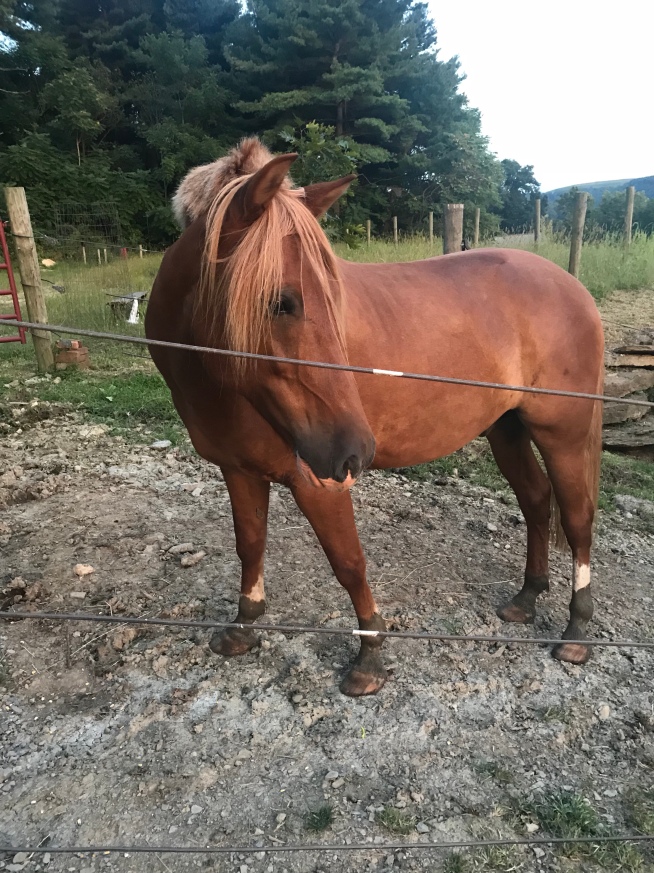 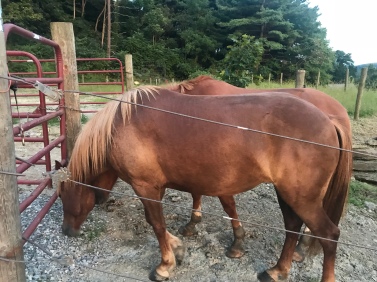 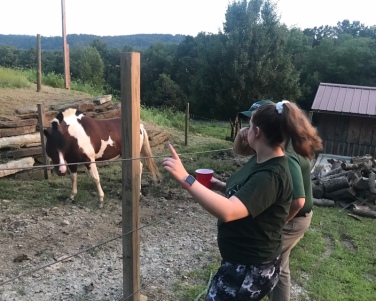 We spent the evening on top of the mountain, just outside of Bethany College, on a small farm owned by Keith and Amy Vanhorn parents of one of Maddie’s college friends, Eden.

The next day, Maddie was in no rush for us to get the rest of things moved into her dorm room, so John and I went to breakfast—something the two of us rarely do.   Afterwards, we sat by the hotel’s fire pit enjoying the coolness of the morning for a few minutes as we each read.  Furthermore, the weather remained mild as we helped to move in both Maddie and one of her roommates, Jillian. I gazed with pride at how organized Maddie’s room looked already with what she had brought with her earlier in the week.  Additionally, she did not want us doing any more work for her once we helped to carry supplies to her dorm room. 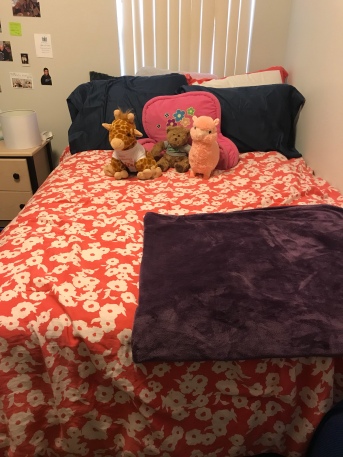 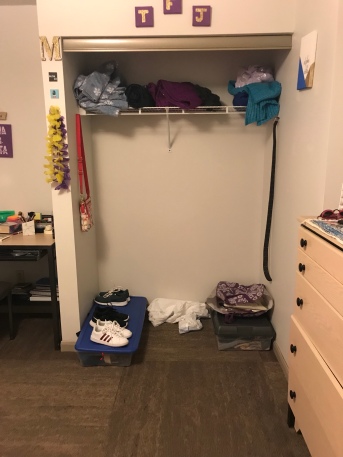 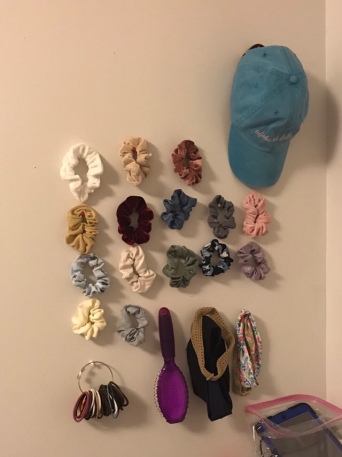 The early stages of organization of a dorm room before we arrived–it was already looking organized. 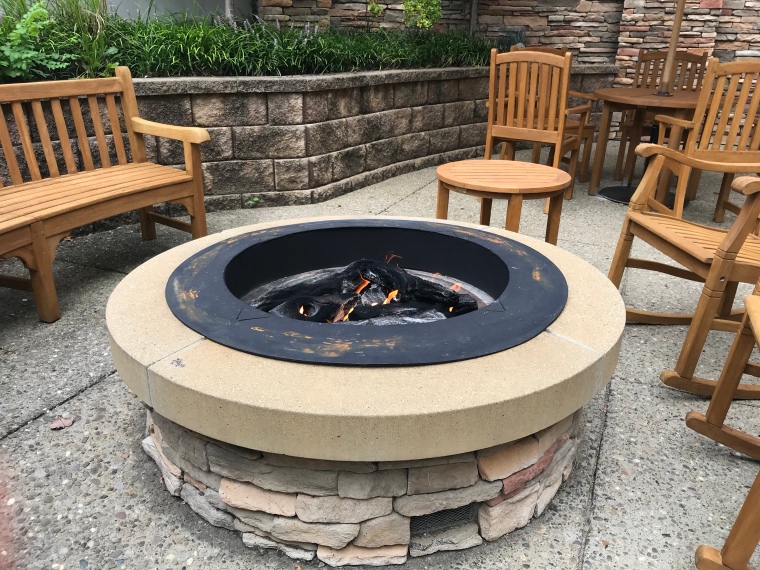 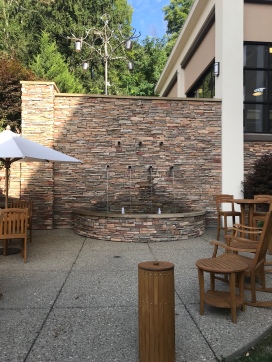 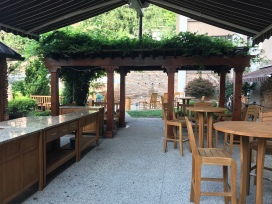 We had time to relax and read for a few minutes on a cool morning beside the hotel’s fire pit, listening to the trickle of the water fall before the big move-in.

Maddie is healthy, bright, articulate, and kind-hearted.  She has a full academic scholarship and begins her second year at Bethany with a phenomenal GPA and enough credit to technically be considered a junior.  She worked hard this summer to overcome a few personal struggles, and John I had the privilege of witnessing her inner growth. 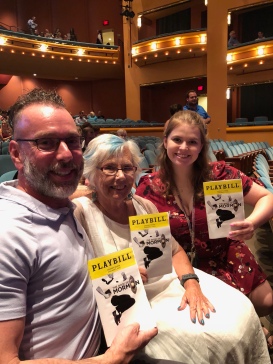 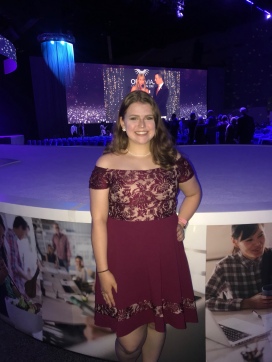 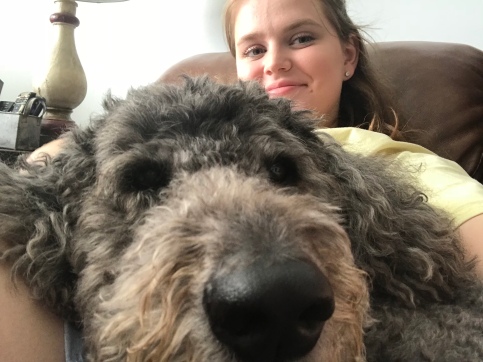 Images of Maddie from this summer:  In Cincinnati with my brother and mom to see a pay, at the Optavia National Convention, and dog sitting with Lizzy, my dad and step-mom’s “baby.”

Why, then, was I focusing on the bitterness of individual tastes and not the totality of sweetness of this event? Humbly, I say, because I am flawed and imperfect.  It is the curse of my humanity, and I have yet to overcome it.

There is saying about how Divine Providence will continue to put the same lessons in your life until you learn from them. At least this time, I was made aware of my errors, and I can call on my faith to help me do better moving forward. 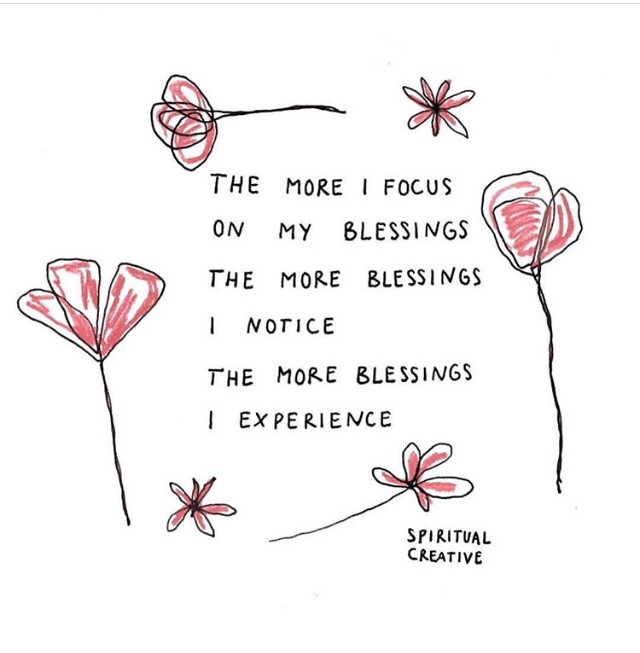 In the meantime, I am so grateful for not only this middle-of-the-night lesson, but even more so for the wonderful opportunities this weekend truly provided.  John and I are so full of parental love and pride, and are truly blessed parents.  I feel hopeful that Maddie will do better than her old mom who is still in need of learning a lesson or two or ten. 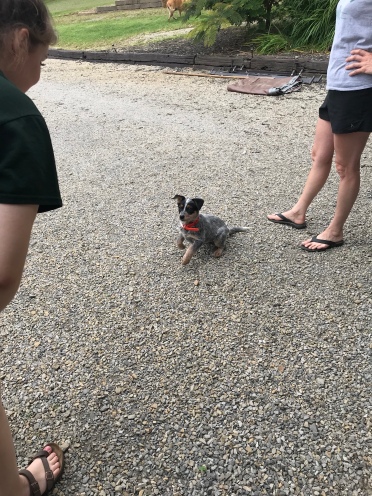 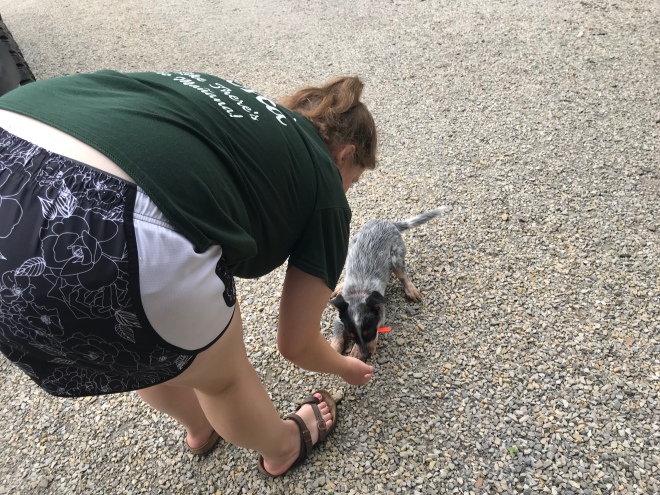 4 thoughts on “Ingredients for a Delicious Day: A Lesson in Savoring the Sweetness of Life”