“You’re off to great places. Today is your day! Your mountain is waiting, so get on your way!”—Dr. Seuss

I was folding laundry this past Saturday evening inhaling the aroma of fragrant, fresh fabric as its warmth wafted through my fingers. Gazing out the back laundry room window, my eyes fixated upon the sadly abandoned swing-set in our back yard. Suddenly, my mind’s eye transported me back in time to the scent of sweaty-headed summers.

My hand lightly grazed the window in a desire to touch that time when kids climbed all over that swing-set, and their calls echoed throughout the valley that is our backyard. Shaking my head out of its reverie, I returned to my task at hand. As I folded both Madelyn’s, my daughter, and my clothes, I realized this would be her last Saturday home for quite possibly months; and how similar, yet different, it was to other Saturdays of her youth.

Our day had started semi-early–as early for Maddie is not as early as when she was younger. Instead of taking the Proctorville Bridge to the YMCA soccer field along WV 2, as we have done every Saturday in August since she was the age of four, we instead took the same bridge, but headed up WV 60 to Merritt Creek Starbucks for a light breakfast before beginning the last lit bit of college shopping for her. 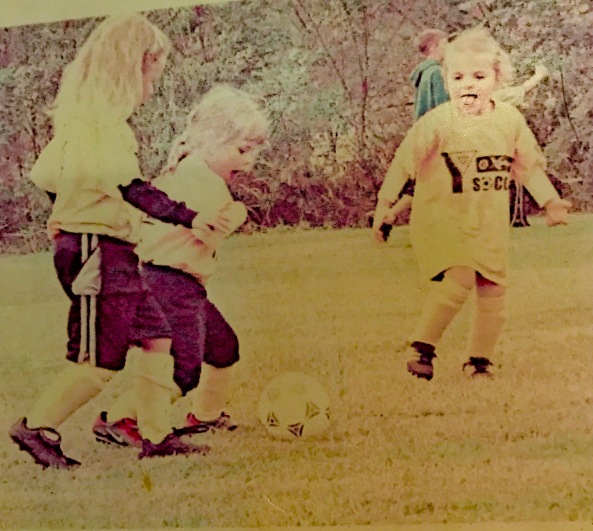 Maddie playing soccer the fall during her first soccer season. 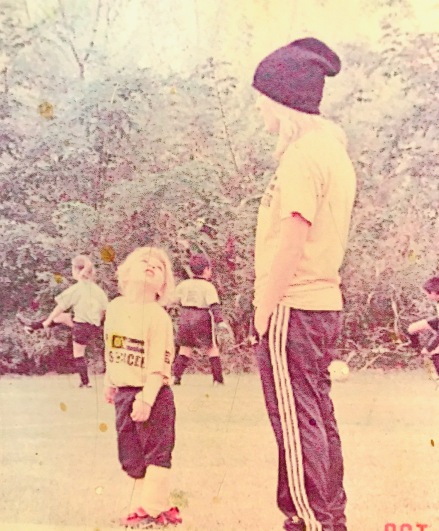 I love the look on Maddie’s face as one of her soccer coaches asks her to do something.

As a child and teen, upon arriving at the soccer field, Madelyn would have quickly exited the car to catch up with friends and teammates. Saturday, as I drove, she alternated between talking with me and texting her friends. Like so many other Saturday mornings, by noon, she was already asking if I minded if a friend came over to spend the night. Thus, we finished her shopping while she simultaneously texted and called her friend to finalize their sleepover plans. 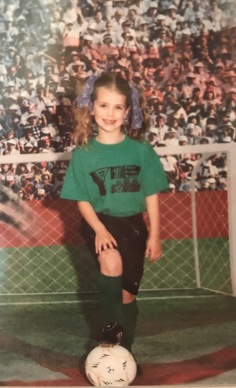 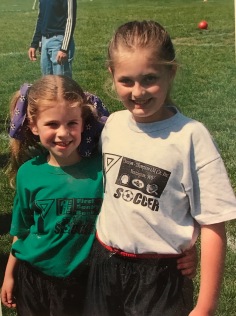 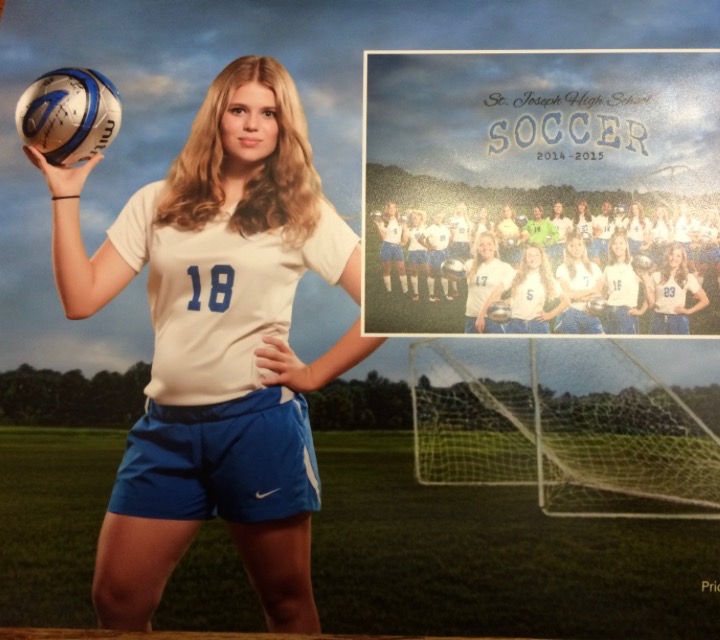 Once home, instead of bursting through the back door and immediately linking up her friend to play with the neighborhood children on the swing-set, Maddie and her friend hung out in the jungle gym of Madelyn’s bedroom. They called other girls on speaker-phone, engaging them in conversation while Maddie’s friend tried on clothes, jewelry, and make-up that Maddie was purging as she packed for college.

It reminded me of the not-so-long-ago dress-up box that Maddie possessed for indoor play. The box was filled with only-worn-once-costumes from Halloween and ballet recitals as well as pieces of jewelry, hats, make-up, nail polish and other accessories. How many times over the years had and that box provided a source of great entertainment for Maddie, her friends, and her cousin. Now, it was as if that box had reappeared as Maddie’s friend modeled the Halloween costumes, dance dresses, as well as pieces of jewelry and makeup from Maddie’s years in high school. This time, however, instead of returning those items to a special play box, her friend will take these items to use for her own special high school “play” days. 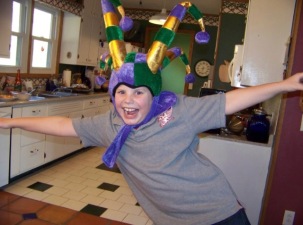 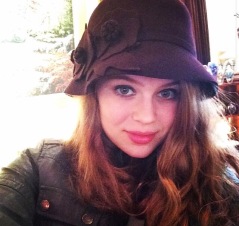 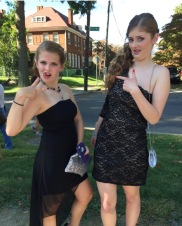 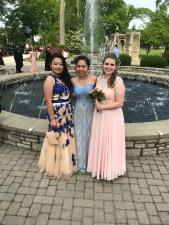 Laundry folded and put away, I began the process of making pumpkin-blueberry muffins—a favorite of Maddie’s. Like a magnet, the swing-set beckoned my eyes to glance out the back kitchen windows as I worked. How many times have I baked those spicy, sweet muffins for Maddie and her friends over the years while watching them play in the backyard on that seemingly magical swing-set? My goodness, it was only yesterday, wasn’t it? 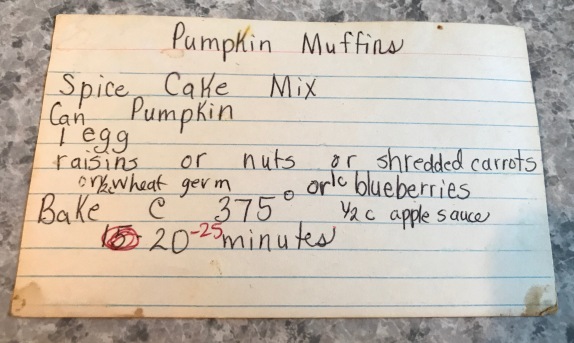 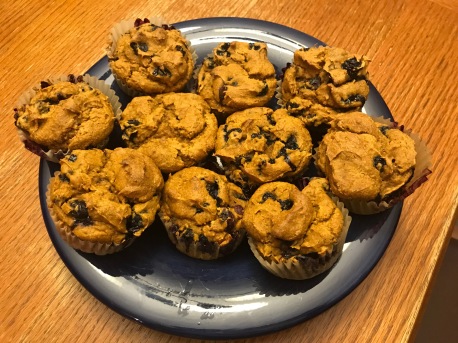 How many times have I made blueberry pumpkin muffins for Maddie during her 18 years at home.

I glanced over to the backdoor as if imploring it to open with the rush of the sounds of a barking dog and the squeal of Maddie’s voice as she, and a long ago sleepover friend, scrambled into the house declaring they’re, “sweating-up”, and can they please watch a movie while they wait for dinner. Soon enough, the family room would be filled the sounds of some musical as Maddie and her friend sang and danced about the room. My husband, John, and I knew so many of those songs by heart; we would often join in the singing and dancing as Maddie and her friend laughed at us. 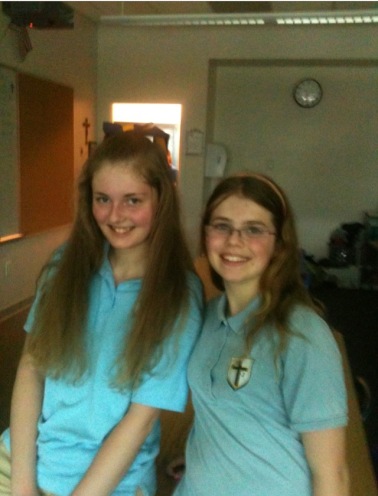 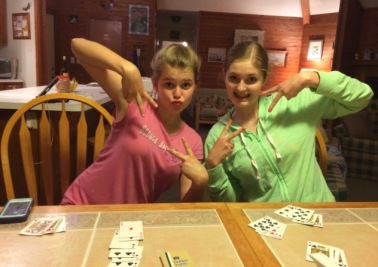 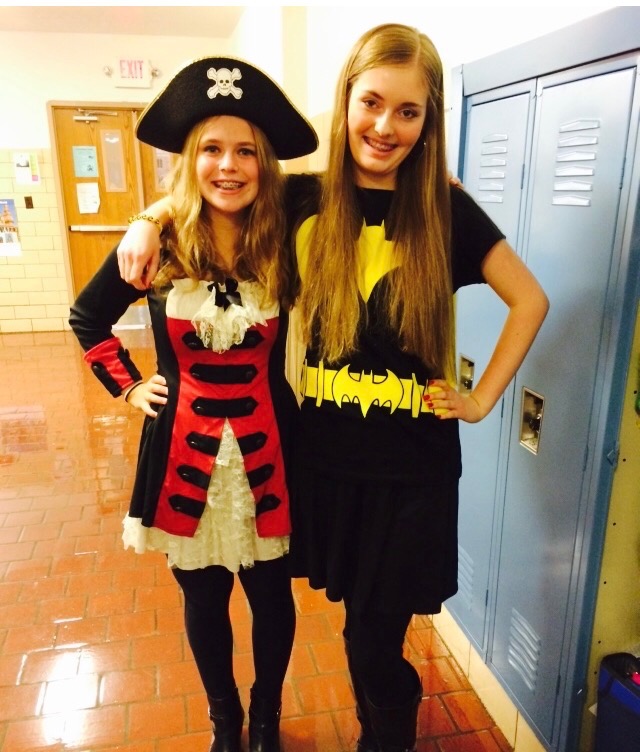 Though that backdoor never opened, Maddie and her friend walked through the kitchen, taking a break from Maddie’s packing; and, as if reading my mind, asked if John and I minded if they watched a movie. Soon enough, the sound of a musical pervaded the family-kitchen-dining room area, just like years ago. Sure enough, it did not take long for John and I to begin singing and dancing along with the girls as they giggled at the sight and sound of us.

With the muffins in the oven, and their all too proverbial aroma filling the air, I turned my attention to dinner. Nothing fancy–salad, pizza, and chips—a supper we have eaten on so many Saturday evenings as a family. It is the one meal we will often eat in the family room, instead of at the kitchen table, especially if we are watching a movie or enjoying a fall football game. 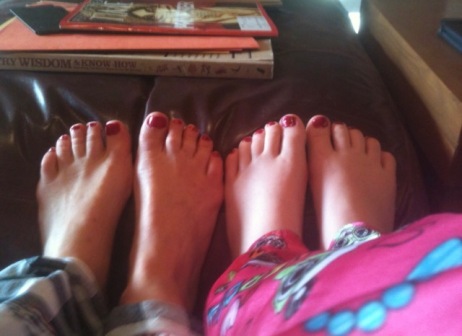 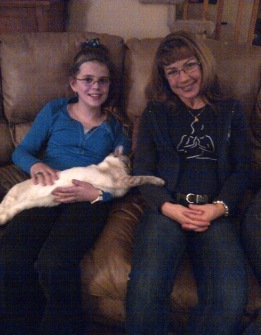 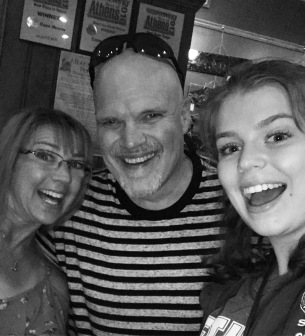 Me, John, and Maddie in Athens, Ohio during the first week of August–just weeks before Maddie will enter Bethany College.

As I sat on the couch eating, legs folded under me, John seated beside me, with Maddie and her friend on the floor alternating between eating, singing, and painting their toenails, it felt as if nothing has changed. Tomorrow morning I would wake up early and write most of this column before the rest of the house is awake. Most likely, the girls will get up, watch another silly movie; and, before long, the house will be filled with sound—sounds that will not be present next weekend. Sounds that have been part of my life for the past 18 years. Sounds that fill our home with peals of laughter and joy. Sounds that are so much a part of my heart, my soul, my being . . . 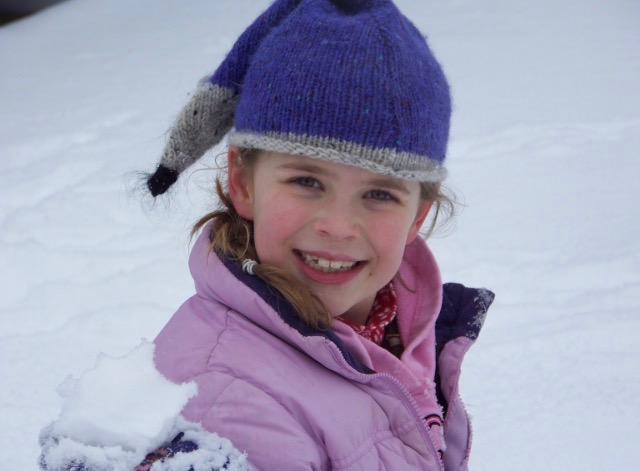 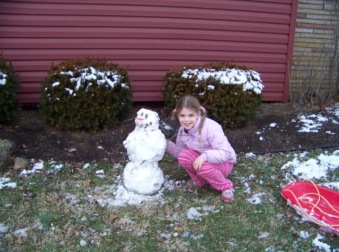 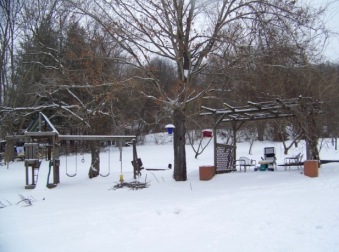 Thursday, the day this piece of writing will be published, is the official move-in day for our daughter at Bethany College, nestled on top of a mountain just outside of Wheeling, WV. John and I will soon return to the valley of our home. The swing-set will remain unmoving outside of our back windows beckoning for a girl who is no longer home. I wonder if I bake pumpkin-blueberry muffins next Saturday, if they will still smell as sweet they did this past weekend? 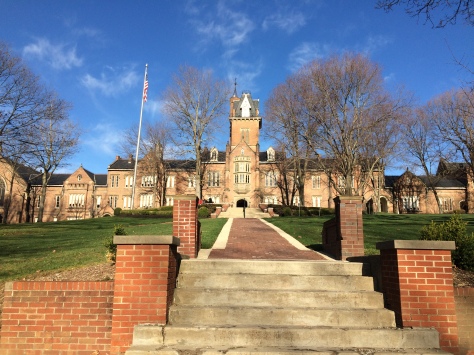 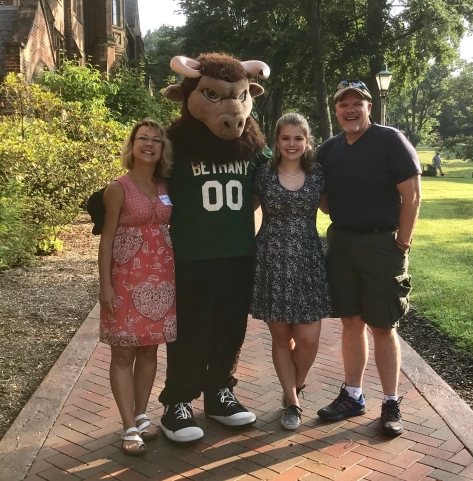 Me, Madelyn, and John at Bethany College in July 2017 for her freshman orientation. 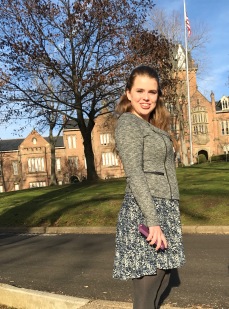 On the campus of Bethany College in December of 2016, during her senior year of high school–just before a scholarship interview. 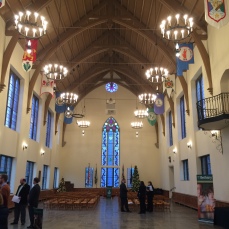 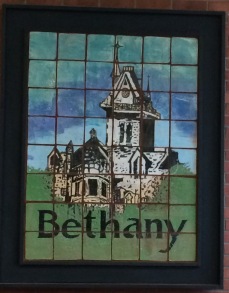 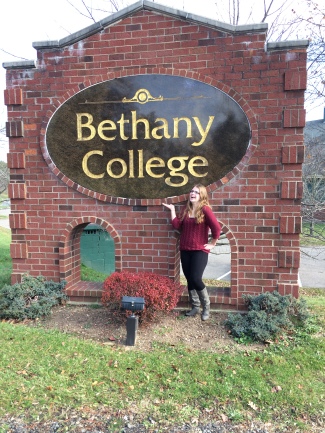 Maddie during our first visit to Bethany College in November of 2015. 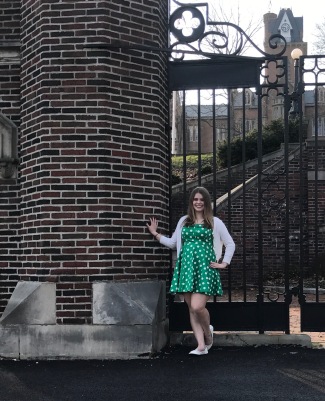 Maddie in front of Bethany College gates that are only open to students to enter at the beginning of their freshman year; and again, upon the day of their graduation. Maddie will be walking through this gate during the last week of August 2017.

(Can be made gluten-free) 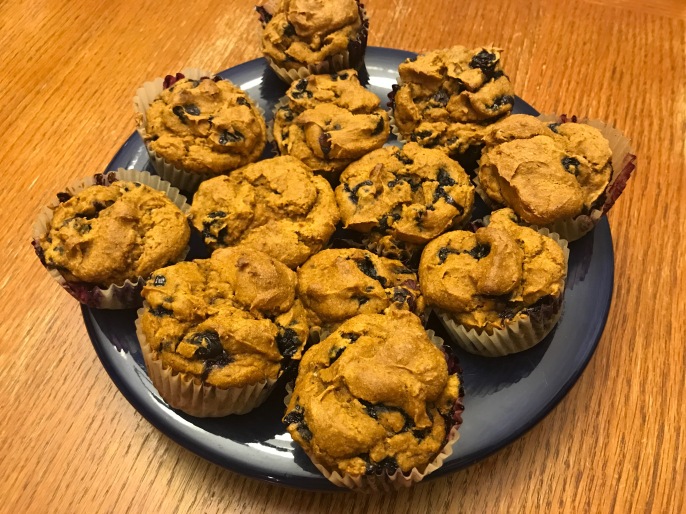 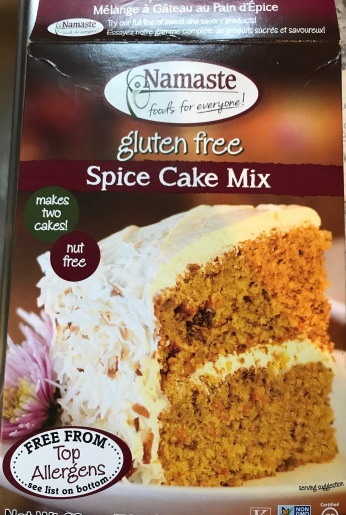 1 box spice cake mix (I use a gluten-free version due to my celiac disease.)

Optional: I like to add 1-teaspoon vanilla, but it is not necessary

Stir together cake mix, pumpkin, egg, and vanilla (if using) until batter is just combined.

Optional: Sprinkle tops with a bit of sugar.

Bake 25-30 minutes, or until toothpick is comes out clean when inserted into middle of a muffin.

Store either in refrigerator or freezer for quick breakfast/snack reheats.