“Gates appeal to me because of the negative space they allow. They can be closed but at the same time they allow the seasons and breezes to enter and flow. They can shut you out or shut you in. And in some ways there is no difference.”—Bob Dylan

“Sometimes the door closes for us so we might turn and see an open gate to a wider field of opportunity.”—Brendon Burchard

As I made my way back across campus, the early evening sun was angling low on the horizon. The dark clouds, that had earlier seemed full of the promise of a downpour, had passed on, allowing a golden light, the color of a light beer, to flow over the mountainside as if pouring from a tap. It is my favorite type of sunlight, and normally, this type of sundown glow over rolling ancient mountains would fill my being with abundant joy. And yet . . .

Walking down the steep incline, I saw it there—the black, wrought iron double gate–complete with a spear point top situated perfectly in the center—was now closed. Only moments earlier, it had been opened. First-year students, some giggling, some talking, and others quietly observant, had streamed through this gate following the ornately robed staff and faculty that led from the opposite side of the gate. The entire procession made its way up the rise and into the inner courtyard of Old Main, a grand piece of Gothic Revival architecture dating back to 1858. It was a deeply symbolical gesture. 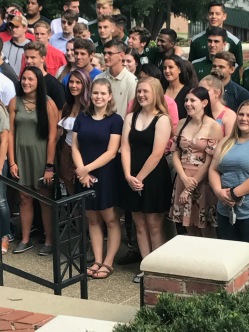 Maddie & one of her roommates, Tatum, joining in on the group picture of the class of 2021.

Maddie & Tatum line up for Matriculation. 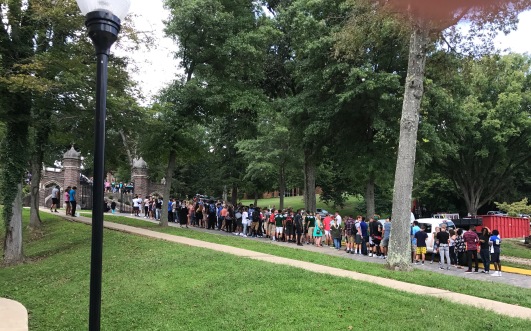 The class of 2021 line up for Matriculation.

Before the development of modern steel making, wrought iron was the most common form of malleable iron. In addition to its manipulability, it was also valued for it toughness. Therefore, wrought iron could be fashioned into original and striking pieces that were, and still are, ornamental, functional, and lasting. This combination made it quite coveted, historically, for thousands of years. In fact, at one time, blacksmiths, often apprenticed in the art of crafting wrought iron, were highly sought after and often considered on par with doctors within their communities. Therefore, I found it quite fitting that the first-year students walked through wrought-iron gates.

To begin, there is the obvious visual. Symbolically, students walked through the gates parting ways with childhood. They were taking leave from the familiarity of family, friends, school, community, and so forth, while crossing into a universe full of unknowns–fresh starts, new friends, new routines, more autonomy, less dependence, and a world of possibilities, one that requires more intrinsic drive. 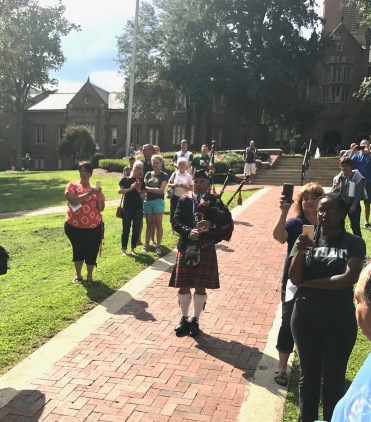 Maddie & her friend, Celeste, walk past in the Matriculation entrance of first year students. 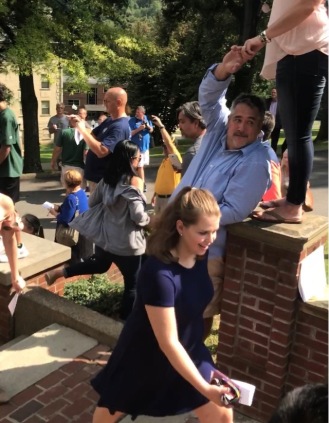 Maddie walks past in the Matriculation of first year Bethany students.

Secondly, it was signal to parents as well. The gates to the former stage of parenthood were forever closed. No longer were parents charged with the day-to-day care of their child. No longer were parents involved in their routine goings and comings. Instead, parents must trust that those 18 years of influence have fully prepared the now pseudo-adult child with the skills needed to choose wisely, the drive to continue to learn and grow, as well as the inter- and intra-personal dexterity to positively connect with others and within.

Lastly, the faculty and staff leading from the opposite side of the gate was no accident. These unknown humans are now charged with the job of community blacksmith to these highly pliable, but hopefully resilient, students. College, with its rigorous coursework, varied requirements, and countless opportunities, will undoubtedly being to form and fashion much of the students’ cast, but not all of it. Life experiences, encounters, and personal choices will also imprint and imbue the early shape of their life.

And so I stood there . . . alone . . .looking at the closed wrought-iron gate with its widely spaced black bars. No child was going home with me. The great unknown looming before me. In many ways, it felt as if I had just experienced the pain of childbirth—a pain that is necessary in order to help God deliver a new life, a new bundle of joy into the world. Only, this time, the infant was not the one crying, and would not be going home with the parents.

As parents, God entrusted my husband and me with the guardianship of our beautiful daughter, Madelyn. Now, Divine Providence has closed these gates; however, the new gates He now places before us, with widely spaced bars, allow for new seasons of parenting to enter and flow. Furthermore, these gates allow air to pass through—just as His presence flows to all. Our kid is God’s kid, and for that matter, so are John and I. We are not alone, and neither is she.