“To travel is to evolve.”—Pierre Bernardo

Author’s Note: This is the last installment of a three-part travel series that mostly featured the Greenbrier Valley area of WV. While the first and second part focused on the outdoor attractions, specifically C B Ranch, and the numerous dining experiences that abound in and around the city of Lewisburg, WV, this piece will focus more on the numerous attractions along the Midland Trail Nation Scenic Byway (US 60).

“Well, should we drive Interstate 64 home, or should we try Route 60?”

I mulled over the question John, my husband, just asked.  The interstate was full of orange barrels (construction) and, most likely, would be busy with Black Friday shoppers driving to and from shopping centers, malls, and big box stores.  We weren’t, per se, in a hurry, so why not slow down a bit?

After a bit more conversation, it was decided. We would travel along Midland Trail Scenic Byway (U. S. Route 60) or Midland Trail, for short.  After all, it was a crisp fall day with bright, clear sunshine that imbued the landscape with a golden light allowing the leafless trees and fallen leaves to possess the color of toasted pecans. 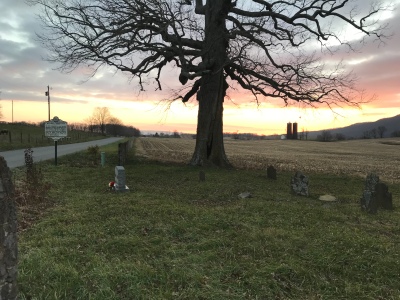 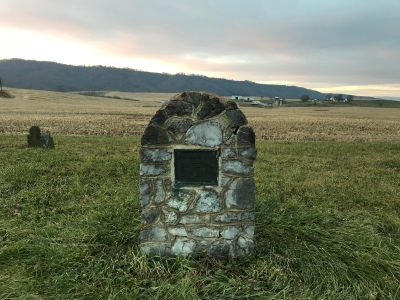 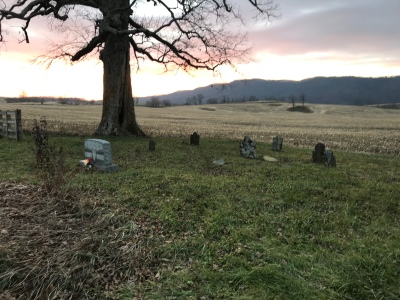 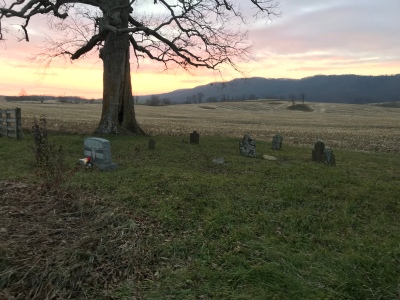 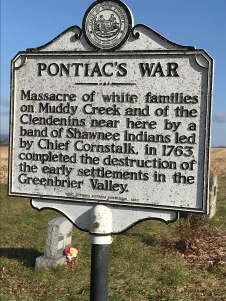 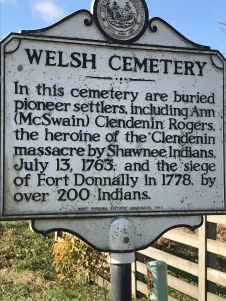 Historic landmarks and a small cemetery along the roadside leading to and from C B Ranch.

As we departed from C B Ranch, just outside of Lewisburg, where we had been staying, the surrounding farmlands glistened in the mid-morning light.  This now familiar road led us directly to the Midland Trail.  However, instead of the usual right that would have led back into Lewisburg, we turned left, and away we drove past expansive farmland, horse and cattle pastures, and earthen fields seemingly at rest for the upcoming winter season.

The Midland Trail is part of a longer transcontinental road linking Washington DC to both Los Angeles, CA as well as San Francisco, CA that runs through a 172 mile southern portion of West Virginia, from Kenova (Mile 0) to White Sulphur Springs (Mile 172).  Research indicates that buffalo and/or native people mostly likely originated this expanse.  Later, George Washington ordered the trail to be cleared.  Of added note, John and I could not help but marvel at how earlier travelers could have ever managed the multiplicity of steep inclines and nausea-inducing switchbacks and curves in covered wagons, coaches or even horseback.  One thing was, and is still, for certain; the Midland Trail offers all travelers picturesque scenery.

Since we were departing from Lewisburg, we completely missed White Sulphur Springs.  (We will have to save that for another adventure.) We were, however, able to drive by Sam Black United Methodist Church, an historic, and quite majestic looking, Carpenter Gothic-style church, located in Greenbrier County and listed on the National Register of Historic Places.  It was built in 1902 in honor of the Rev. Samuel Black, a circuit-riding Southern Methodist preacher credited for spreading the gospel through Greenbrier, Clay, Fayette, Nicholas, Webster, and even Kanawha counties.  Black sold socks and deerskin gloves made by women of his congregations in order to help organize and build numerous churches throughout his beloved circuit. Thus, he came to be affectionately known as, “Uncle Sam.”

Babcock State Park, the next point of interest after Lewisburg, took us by surprise, and we unintentionally drove past the exit.  We had been told that we needed to see and photograph the Glade Creek Grist Mill where cornmeal is still freshly ground, so we will have to save that for another visit.

Next up, Ansted and Hawks Nest State Park. While we did not, precisely, drive into the park, we stop at the look out area as well as the gift shop. This was a beautiful rest area with plenty of picnic and hiking spots, but it was the lookout that was indeed the true focal point.  This area offers breath-taking views of the New River Gorge.  While I am typically not afraid of heights, I have to admit, looking straight down over the edge of the lookout rock wall made me dizzy and a bit nervous!  Still, what an awe-inspiring view! 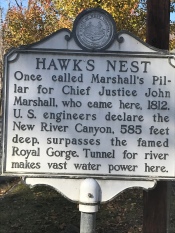 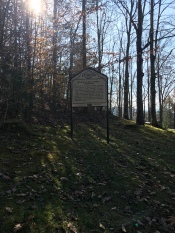 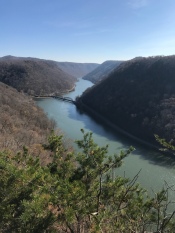 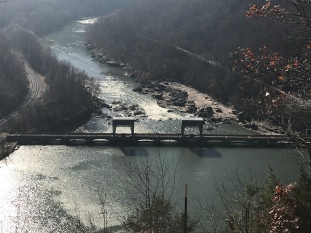 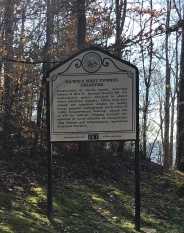 A few views from Hawk’s Nest. 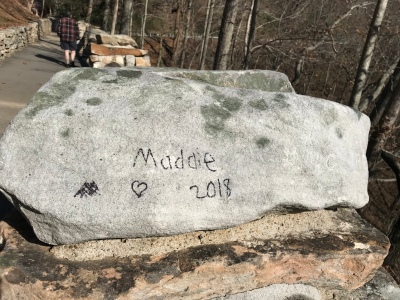 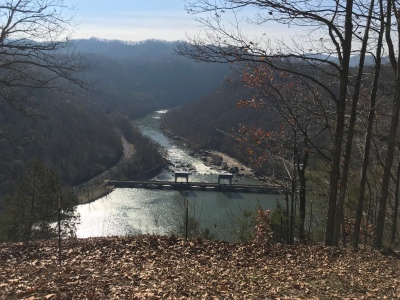 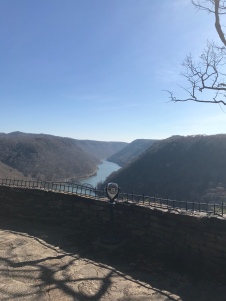 While our daughter has never visited Hawk’s nest, I couldn’t help by photograph a rock with her name carved in it.  Looking over the rock ledge made me nervous and dizzy.

Driving on, we passed both Mystery Hole and Chimney Corner.  Described as a place where gravity does not apply, Mystery Hole is exactly that—still a mystery to me as we did not stop.  We have read that it is certainly worth the time to see balls roll uphill and chairs sit on a wall, but we decided to save both it, and Chimney Corner, with its country store and corner café, for another trip.

Traveling westward, we derived great pleasure by the views at Gauley Bridge where the New and Gauley Rivers join to create the Great Kanawha River.  Additionally, we were able to see the remaining piers from a bridge burnt by Civil War soldiers for which we had read about at the Hawks Nest look out. However, it was the stunning sounds and view of Cathedral Falls that left us speechless!  Of course, the mere fact that water roared at deafening levels as it cascaded over the mountainous granite wall made any conversation nearly impossible! 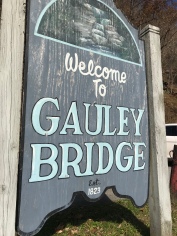 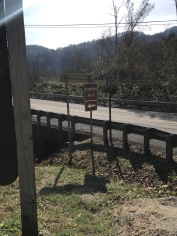 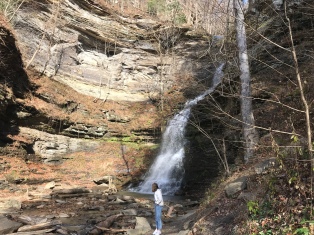 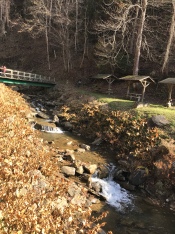 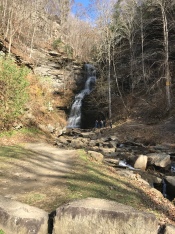 Images from Cathedral Falls and Gauley Bridge area in WV.

Listen to the sounds of Cathedral Falls, WV.

Making our further along Midland Trail, John skillfully maneuvered the car around the twists and sharp turns of Gauley Mountain while I navigated the waves of carsickness attempting to overtake me. Gratefully, we entered a semi-straight stretch of the byway as we took in the view of Kanawha Falls and the Glen Ferris Inn.  My sister-in-law, Jacki Humphreys, and her husband, Tony, had recommended that we stop in the 1839 Inn for a bite of lunch to savor the view of the falls; however, since it was hours past lunch time, we decided that this should be saved for another trip. In the meantime, we did stop at the boat ramp, which appeared to be fairly unkempt due to what appeared to be heavy flooding, in order to better view and take pictures of the rushing falls.   Plus, the fresh air was an excellent remedy to motion sickness! 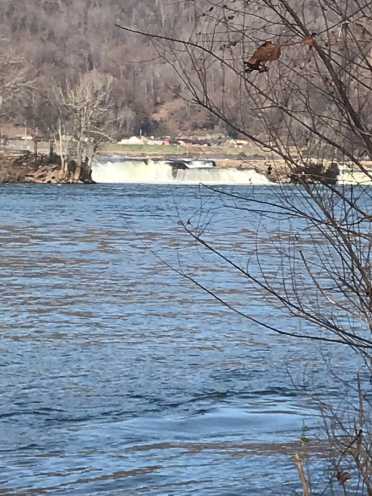 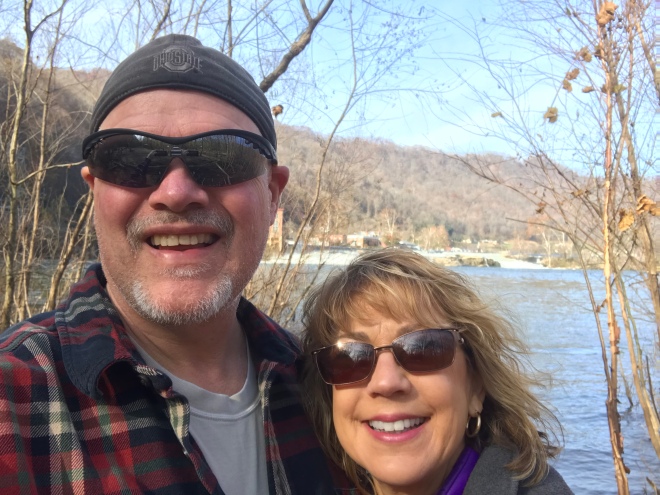 Continuing on, we drove past Cedar Grove with great interest, but did not take time to stop by, choosing to also save it for another trip.  Of interesting note regarding this town, it was established in 1774 and was the location for the finishing point of the original road George Washington commissioned. There is both a mansion and a chapel from the mid-19thcentury located within the town’s borders.

Ten or so miles past Cedar Grove, is Malden, known as the boyhood home of Booker T. Washington.  This town has a replica of Washington’s childhood cabin as well as the church in which he taught Sunday School which can be viewed by the public.

Of course, the Midland Trail does end there. Other highlights include Charleston–the state capital of WV, South Charleston, St. Albans, Hurricane, Milton—home of Blinko Glass, Huntington with its Old Central City section, Camden Park— a 109-year-old-amusement part, and of course, Kenova, the starting point, that the geographical borders of West Virginia, Kentucky, and Ohio.  However, as these areas are our own local stomping grounds, and certainly noteworthy, each in their own right, we decided to drive on home, so we could plan our next traveling adventure.

Hmm . . . I wonder where the road will take us the next time?

One thought on “Midland Trail, National Scenic Byway, a Road Full of Adventure and Fun”