Most people never really sat down and get to know a homeless person, but every homeless person is just a real person that was created by God and it is the same kinds of different as us; they just have a different story.—Ron Hall

There is a lot that happens around the world we cannot control.  We cannot stop earthquakes, we cannot prevent droughts, and we cannot prevent all conflict, but when we know where the hungry, the homeless and the sick exist, then we can help.—Jan Schakowsky

We were tired, our bodies ached, and we were hungry.  Our school day started at 7:30. After school, I spent time with students in my “Elevate Writing and Arts” Club until 5:15 or so. Afterwards, I joined the other St. Joseph Catholic Middle School Teachers who were already busily working away to prepare and decorate our school gym for a Christmas movie themed dance for 6-8 grades at both our school and Our Lady of Fatima School.  Soon, the students began arriving.

Overall, the dance went well.  Kids seemed to have a great time, there was plenty of food, and their Christmas movie themed costumes were phenomenally fun! All in all, we felt pleased that everything seemed to come together without a hitch.

Of course, once students were safely returned to their parents, there was still the clean-up process.  When all floors, decorations, tables, and so forth, were sufficiently returned, each to its proper place, we were able to lock up the school, and walk out of its doors sometime between 10:00 and 10:30 pm.

John, my husband and co-worker, asked me if I wanted to grab a bite to eat since we had not yet eaten dinner.   We were both too tired to cook, but wondered if there would be any late night eateries open. Sure enough, Roosters, in Pullman Plaza was open until midnight, and served food until 11:30.  It sounded perfect as it was only located a few minutes from our school.

Once there, J’lisa Kelly-Walker was our server/bartender.  She was quick with a smile and possessed an easy-going, friendly demeanor.  We sat in the bar as that is where most patrons this time of evening were dining.  John ordered a sandwich, and I ordered a salad. While we were waiting, we shared pleasant conversation, despite our overall fatigue as we took in the people around us.

Not long after we placed our order, a dapper looking gentleman sat at the bar beside us.  Dressed in a suit, he gave off the appearance of having just finished his workday as well.  He was unassuming, ordered his food, and seemed content to sit quietly as he waited. While J’lisa seemed to know him, perhaps he was a regular customer; she respected his desire for solitude.

As a long-suffering people watcher, this man’s purpose seemed one of efficiency.   He talked into a wireless headset occasionally while reading on his phone. He courteously interacted with J’lisa, and received his food around the same time we received our meals; however, he did not engage in active conversation with her as we were doing. (J’lisa is a mom of three beautiful children, and we enjoyed chatting with her.) 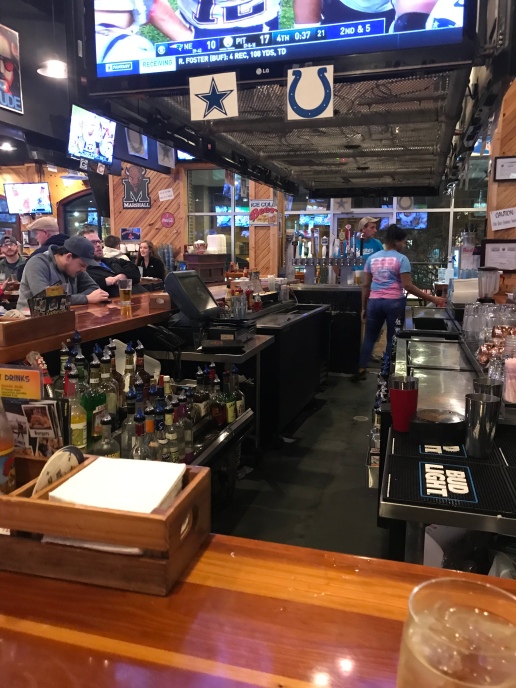 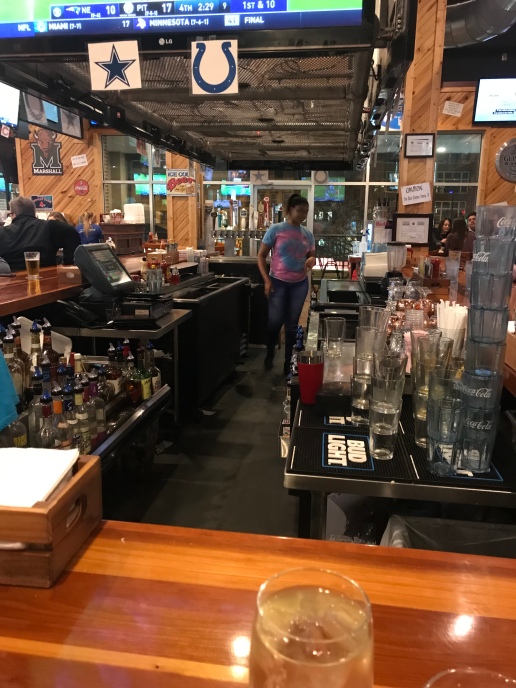 While we were finishing the last of our food, the reserved man beside us, who had already paid, quietly slipped away into the chilly night.   Ten or so minutes later, just after we had asked for our bill, I noticed the same man re-enter Roosters, but this time, he had another man with him. The other man was a pale, stark contrast to his well-dressed, black companion, as he looked a bit disheveled with a visible line of black beneath his nails.  His hair was in need of some TLC, but he was civil and peaceeable. The more distinguished man seated his companion in the same area in which he once sat, whispered to him, and then motioned for J’lisa to come over.

It a minute or two past 11:30, as J’lisa cheerfully asked the seated man what he wanted to drink.  I could not help but notice J’lisa giving him not one, but two to-go cups filled with Mello Yellow soft drink.  Then, she met the unknown businessman at the opposite end of the bar as the man talked softly to her and then gave her his credit card.

J’lisa walked to speak with what appeared to be a manager.  I overheard the manager say, “The kitchen closes at 11:30, and it is past that time.”

J’lisa, not to be deterred, sweetly and sincerely, smiled, and urgently replied, “But they’re not shut completely down, the other man is willing to pay, the guy is hungry, and it’s cold outside.  See if they will do for me.”

Though he wasn’t mad, he certainly wore the expression of inconvenience, as he walked in the direction of the kitchen, and soon returned to whisper in J’lisa ear.  I watched in focused anticipation and baited breath as John asked me what was going on.

“I’m trying to figure out if the restaurant is going to do the right thing.”

Admittedly, I was taking people watching to an extreme, but my heart had a vested interest in this unfolding drama.  I watched as J’lisa walked toward the bar. Was the credit card still in her hand? I couldn’t see it! Oh no! The suited gentleman began to walk toward the other man, leaned in, whispered, and patted his arm. The seated man nodded, and turned slightly towards the other with the appearance of disbelief.  Meanwhile, my heart pounded as I wondered if he going to be fed?

Suddenly, J’lisa appeared, handed the businessman his credit card as well as the bill.  Another hungry, alone soul would have warm meal in his belly before another cold night on the streets. John and I quietly walked away, and I felt tears sting my eyes with gratitude for bearing witness to the Christmas spirit embodied in the actions of this one man, followed by J’lisa, the Roosters management, and kitchen staff.

What if the man who owned the Inn, had turned Mary and Joseph away all those years ago?  I am sure that they, too, were disheveled with dust/dirt-covered clothes and skin as they had travel for miles on a dirt road.  It is certainly worth remembering and contemplating.

P.S.  Thank you J’lisa, Rooster’s staff and management, and unknown man-of-action for inspiring this story.  It is my hope it will ignite others into simple acts of kindness, not only during the holiday season, but also throughout the year.  Finally, my wish for the hungry man at Roosters is that he may come to know peace, love, and compassion; and, most of all, may he one day no longer need to be at the mercy of others for food and warmth.