“Soon after, I returned home to my family, with a determination to bring them as soon as possible to live in Kentucky, which I esteemed a second paradise, at the risk of my life and fortune.”—Daniel Boone

Author’s Note:  This is part 2 of a travel piece regarding my recent trip with my husband, John, to Lexington, KY.

After a good meal the night before at Pies and Pints and a sweet snack from Trader Joes, we were up early, ready to go at Homes2 to Suites by Hilton Lexington, KY.  First priority though, we both squeezed in a workout. While I would not say, the fitness center at Home2 to Suites offers full gym experience; it does possess enough of the basics to maintain some semblance of a fitness routine.  Of course, after the workout, we took time to enjoy the hotel’s expansive breakfast bar while we mulled over our plans for the day.

It was over our second cup of coffee that we decided to visit Fort Boonesborough State Park, about a 30 minute, or so, drive away.  We were fortunate to visit in April, the start of their season, which runs from April 5-October 31. This Kentucky State Park offers a campground, pool, and a reconstructed fort built in honor of the original Fort Boonesborough, a frontier fort in Kentucky founded by Daniel Boone and his men following their crossing of the Kentucky River on April 1, 1775.  This reconstructed version is a complete working fort with cabins, blockhouses, and furnishings offering visitors a glimpse into pioneering life in 18th century Kentucky. Throughout the year, Fort Boonesborough offers numerous special events with different historic emphasis. Although there were no special on-going events during our visit, we were able to still get a taste of those early pioneering days. 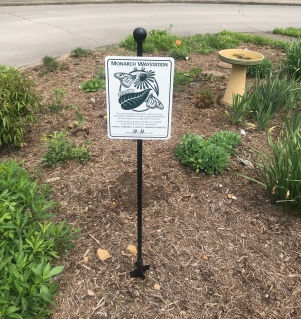 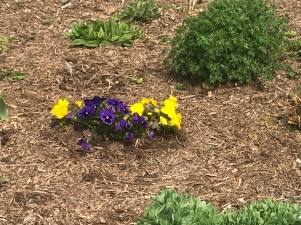 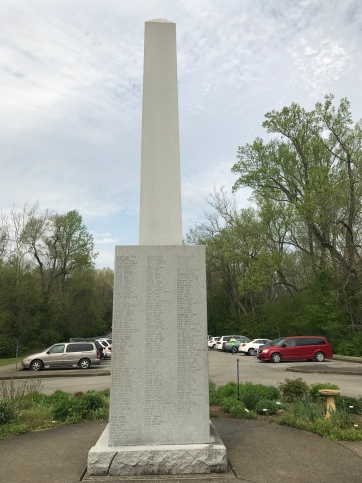 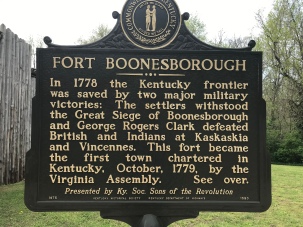 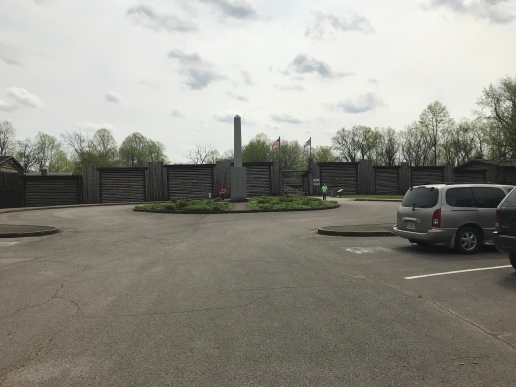 Images from the entrance area of Forts Boonesborough, Ky.

We began at the orientation building, watching a nearly 30-minute long documentary on the rich and unique history of Fort Boonesborough.  Afterwards, we took our time on a self-guided tour visiting as many of the cabins and blockhouses that were open, as well as listening and interacting with resident volunteers and artisans who make crafts and/or answer questions/offer information about life inside the fort.  These living history staff members were appropriately dressed in 18th century attire, and offered much insight into 18th century pioneer life. 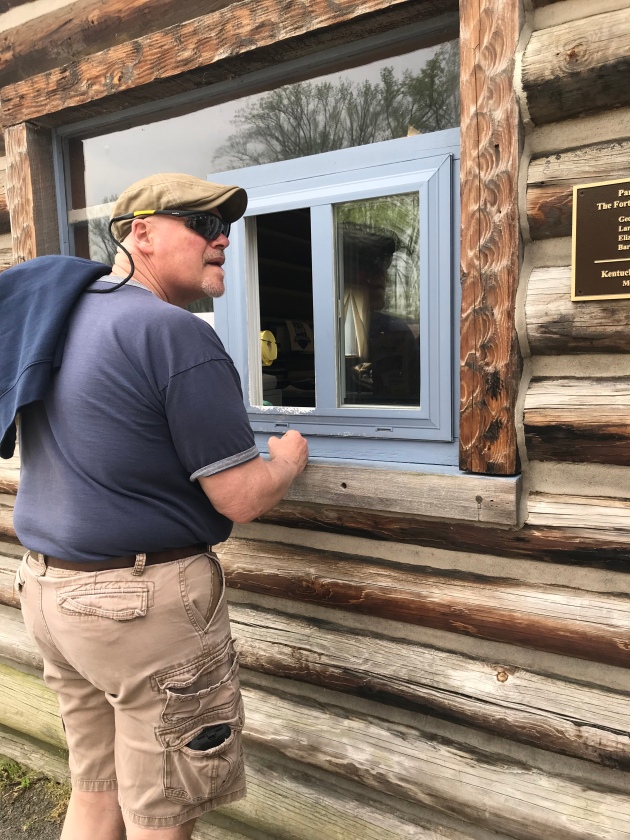 Cabins are arranged in a circle.  Visitors are encouraged to turn left past the entrance and begin at the Orientation building. John purchases entrance tickets for us. 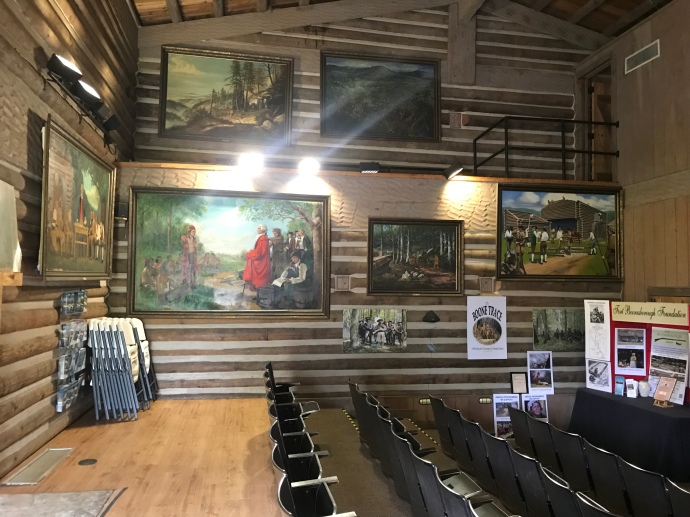 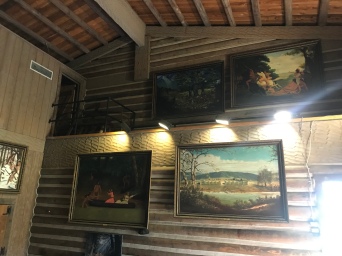 Beautiful, historical paintings line the walls of the orientation room.

A small snippet of the the introductory video that is quite informative. 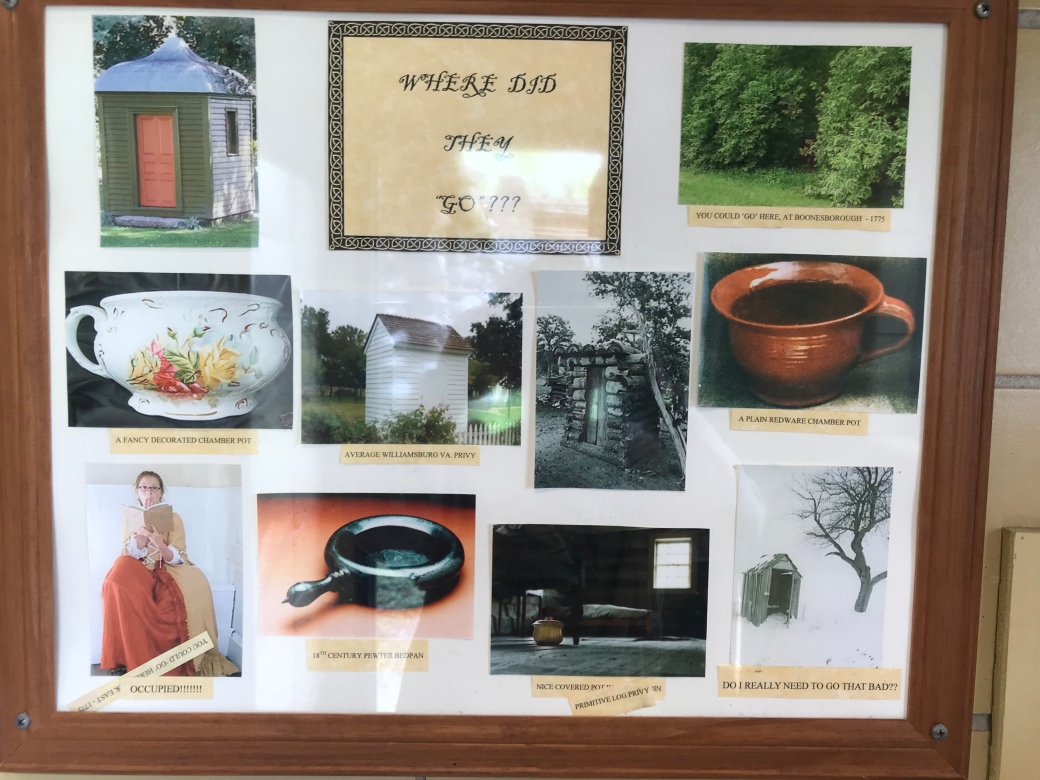 Even the bathrooms have bits of 18th century history for visitors.

In fact, we learned a few random, but fun facts.  For example, at one cabin, we were able to view how yarn was made from locally harvested wool and dyed, using native plants, such as walnuts, black eyed-susan flowers, and goldenrod, the state flower of Kentucky.  We further learned that women’s dresses were purposefully made without fasteners because an 18th century woman, living at Fort Boonesborough, would have only a couple of dresses her entire adult life, and those dresses needed to be able to accommodate her ever changing body size and shape.  Additionally, women were often better shots with guns than their husbands, as the men could be gone for extended periods at a time; thus leaving the women to defend themselves and their children. Furthermore, as soon as a child was old enough, male or female, they were put to work weaving, spinning yarn, or other such ongoing chores as young as the age of two years!  Plus, nearly every plant in the surrounding woods served some purpose to these pioneers! Additionally, nothing inside the fort was wasted, and all materials that could not be consumed were reused, recycled, or repurposed. 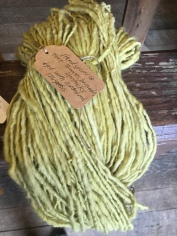 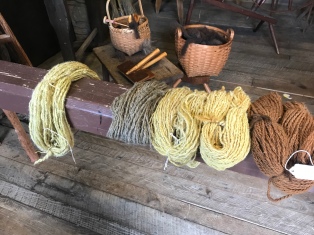 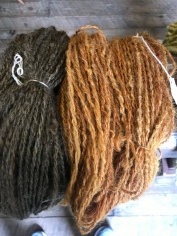 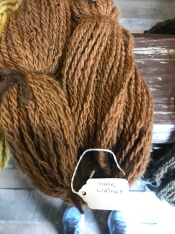 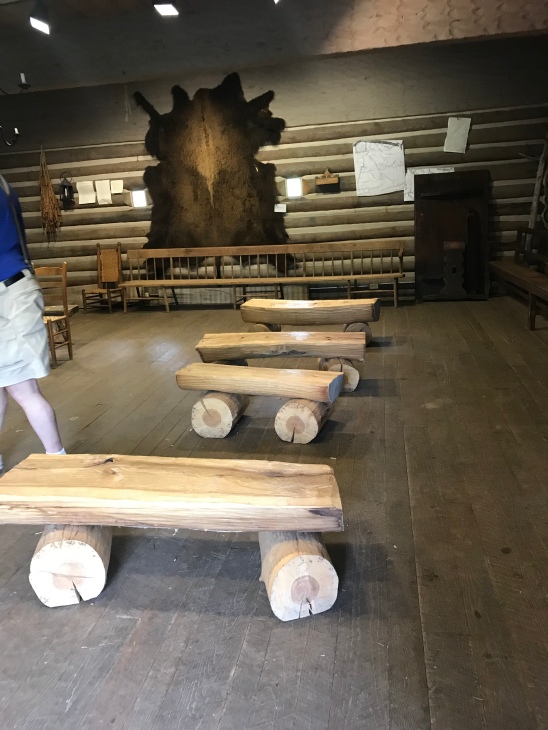 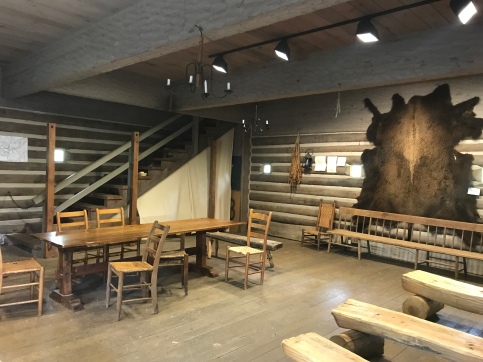 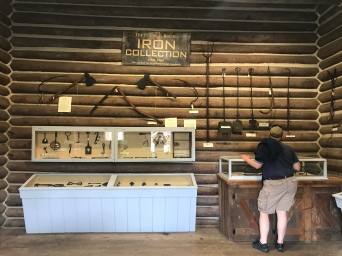 After a complete tour of the fort, we decided to explore one of the hiking trails.  This meandering, downhill (and uphill on the return) path led us down to a beautiful cool area with running water and the not-so-natural sounds of a distant highway! Along the path were numerous tiny white and violet flowers, vibrantly green mosses, and oversized mushrooms. Additionally, birdsong followed us all along the trail adding a melodious backdrop.  By the end, according to my tracker, we had hiked over four miles at a pleasant and conversational pace. 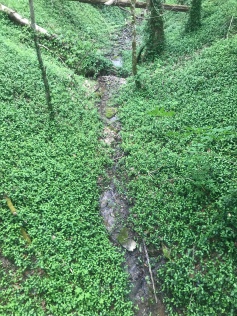 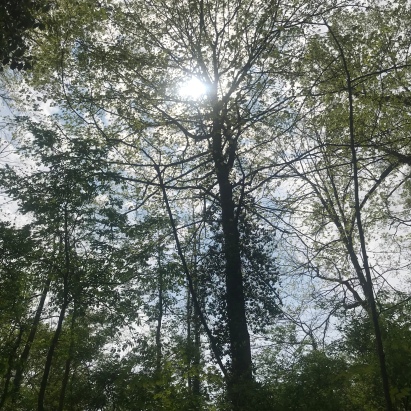 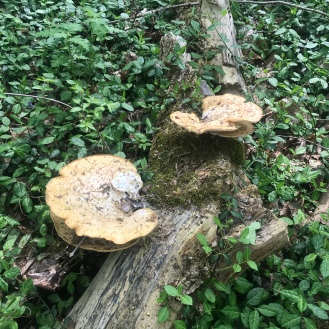 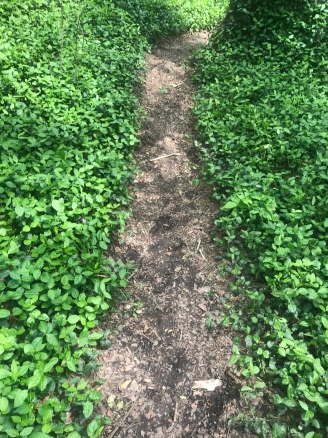 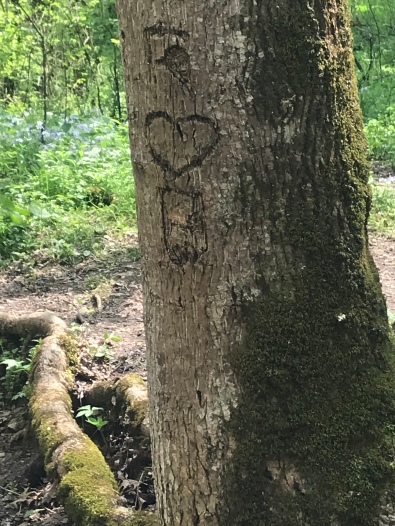 More beautiful images from the trail.

Three short video clips capturing the sights and sounds along the trail.

Back at the hotel, hungry, tired, but relaxed from all of our time spent out-of-doors, we debated our plans for the evening.  Lexington has a Distillery District along Manchester Street, and John is a huge bourbon fan. However, John is also passionate about finding restaurants in which I can easily dine due to my celiac disease and my commitment to eating mostly plant-based foods.  As he perused through a number of local menus, he came across a place called, Carson’s, not in the Distillery District, but not too far away either. Doing what John does best, he zeroed in on the dishes he thought I’d like and began reading them aloud to me.  I was sold!

According to the founder, Mark Fichtner, Carson’s is . . .”a rustic, yet refined concept with chef-driven recipes paired with prohibition cocktails, hand-selected wines, and craft beers.”   After a beautiful Uber drive through downtown, we walked into an industrial style setting with abundant leather, wood, brick, and over-sized crystal chandeliers sparkling overhead. As odd as that sounds, the atmosphere worked, and put us right as ease. 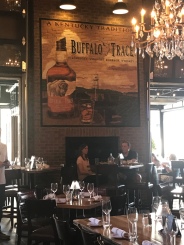 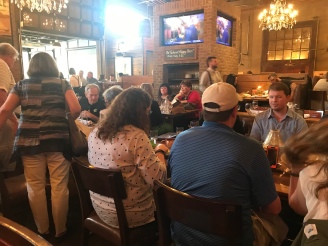 Water is chilled and  served in repurposed bourbon bottles; chandeliers hang from the ceiling; ample wood and leather; and an attentive and friendly staff make Carson’s atmosphere fun, casual, and yet, refined.

Our servers for the evening, Cassidy and Madeleine, (I hope I spelled her name correctly!) were attentive, thoughtful, and full of advice/suggestions regarding food and beverages.  Additionally, we were able to meet and spend time talking with Kyle Limmerman, General Manager. He was a wealth of knowledge regarding food, beer, and bourbon, as well as was an on overall great conversationalist!  However, the biggest “talker” of the night, was the food!

The menu of Carson’s is expansive; spanning all taste ranges from burgers to steaks, ribs to seafood, from salads to gluten, free vegan options, and nearly everything in between.  After much debate, discussion, and advice, we began our meal with béarnaise truffle fries. Oh my heavens, made with béarnaise, white truffle oil, shredded Parmesan, and scallions, John and I could have shared this with four other adults! The taste, scent, and texture were out of this world delicious! 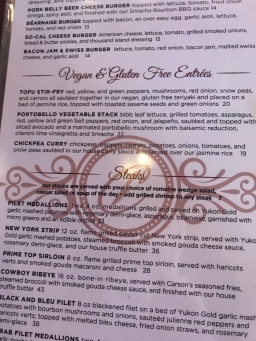 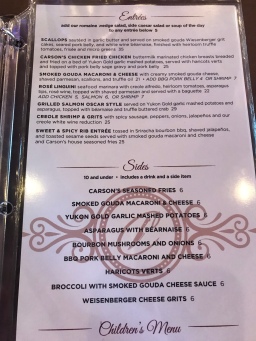 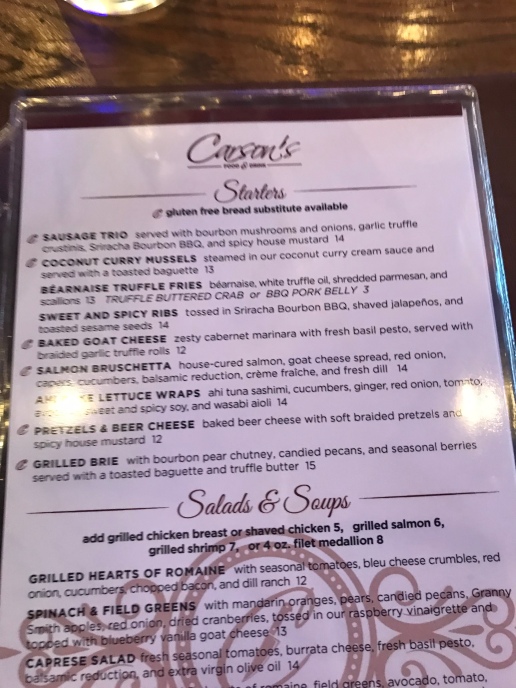 We began with an appetizer, béarnaise truffle fries.

For the main course, John enjoyed the Pork Belly Beer Cheese Burger.  Topped with lettuce, fried onion strings, spicy aioli, and finished with their sriracha bourbon BBQ sauce, this burger is sure to please!  John ordered it with a side of smoked Gouda macaroni and cheese that looked as if it were swimming in cheese sauce! Needless to say, after eating all of those fries, John ended up taking half of his dinner back to the hotel with us. 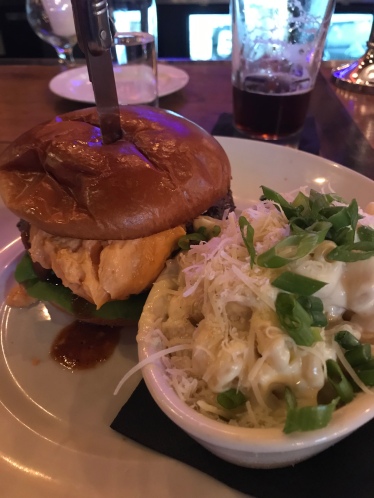 Meanwhile, I ordered the Portabella Vegetable Stack. This beautifully plated meal started with a bed of Bibb leaf lettuce and added grilled tomatoes; asparagus; red, yellow, and green bell peppers; red onion; and jalapeños sautéed. Then, it was topped with sliced avocado, marinated Portobello mushroom, and drizzled with a balsamic reduction, cilantro lime vinaigrette, and sriracha. HEAVEN!  What a gluten-free, vegetable delight for me with so many gorgeous colors, tastes, and textures blended into one perfect dish! Unlike John, I ate every last morsel of my meal! 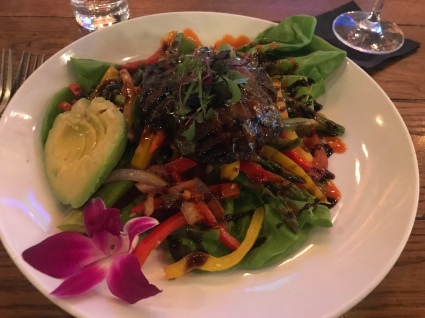 Sadly, our stay came to an end, as it was a short, but sweet stay.  We did do a quick stop at Lexington’s Whole Food Market situated in a gorgeous, and seemingly newly developed area, called, The Summit at Fritz Farm, just minutes from the hotel.  While there, I met a super-infectious barista who educated me on all things I did not know about coffee and the use of non-dairy milk to make various coffee drinks. He was quick to offer John and me both samples and made an aesthetic looking cappuccino out of espresso and almond milk that tasted as good as it looked.

At Whole Foods I enjoyed an aesthetic looking cappuccino out of espresso and almond milk for the chilly and rainy ride home!

We drove home in a chilly rain, but the route was still guarded by ample red buds waving goodbye as we made our way home with warm thoughts of the possibilities for our next food/travel adventure!

From our home to yours, John and I wish you safe, happy, and pleasant travels! 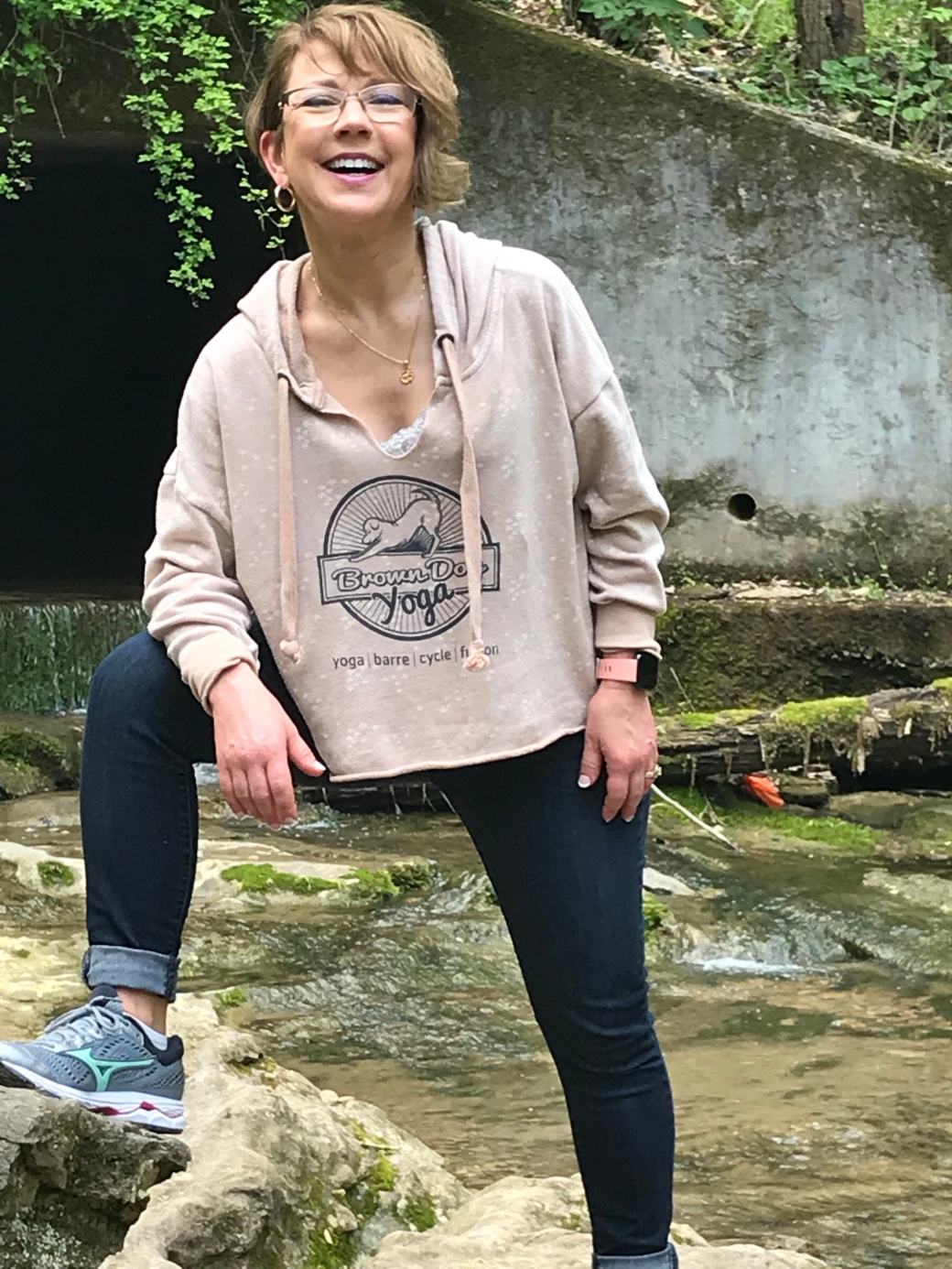