“Art is a human activity having for its purpose the transmission to others of the highest and best feelings to which men have risen.”–Leo Tolstoy

“The first thing a kindness deserves is acceptance, the second, transmission.”–George MacDonald

As a kid, my parents had this small, portable silver and black transistor radio that could be moved throughout the house and even outside–depending upon the user and setting.  As best I recall, it had a telescoping antenna, so it had the ability to pick up both AM and FM radio stations. From my young girl perspective, it was a tried and true piece of seemingly magical technology that appeared to work with the raising and lowering of the antennae and a twist of a knob.

I can remember seeing it in my parents bedroom window tuned to WGNT in the mornings, so that they could hear weather updates and/or school closings.  I’d watch Dad carefully adjusting the dial to listen to a Reds game while he was outside washing and/or tinkering with the family car on Saturday mornings.  Mom often tuned in and listened to it while working in the backyard hanging up laundry to dry; then later, taking it down; or when soaking up the sunshine while reading a current novel.  I can even recall the way it traveled with my dad through all the various modifications and additions to our family house whenever he was in construction-mode.

This radio worked best when placed in a window if being used indoors; whereas, if it was being used out of doors, it worked better, especially when the antennae was fully extended.  As a young girl, I would beg to use that radio, especially if I were outside. I’d slide the tiny black block to the FM position, and then I’d slowly rotate the wheel-like dial on the side of it until the red line fell somewhere just past 100 on the dial for WKEE, “Playing all your favorite hits!”  I felt so grown up.

Listening to music on that long-ago transistor radio must be similar to how I have envisioned it is like to play a slot machine at a casino.  Just before lifting the handle, a prayer is offered, pleading for matching images to come up, dreaming of the money that could be won. I can only imagine the let-down that occurs when those images don’t match, but just as quickly, the way in which hope appears once more.  Maybe, just maybe, with another pull of the handle, the winning images will happen this time!

In a similar manner, as a young girl, I’d hold my breath as I turned on the radio, praying that my favorite tune would be played next.

Still I had to endure those dang commercials, the lengthy live broadcasts from local businesses hawking their wares, or the overplayed-no-longer-greatest-song-ever-created.

I kept coming back though, kept tuning that radio to the same station, the exact same frequency because I knew eventually, a good song would be played, my mood would be lifted or enhanced, and I could dance, sing, or be-bop my head to the beat.  Ultimately, I even developed the ability to ignore most of what I perceived as the negative side of radio–tuning out most commercials and songs that were no longer of interest to me.

As I became older, I was even given that same radio for use once my parents no longer used it. I also kept that radio poised in one of the windows of the bedroom I shared with my sister, antenna fully raised, and tuned into one of my then favorite local frequencies–WKEE, WAMX, or ROCK105–depending upon the mood and type of music I wanted to hear. That radio, in spite of its age, when properly tuned, still had the ability to receive and transmit a good song, positively influencing my mood, increasing my energy level, and elevating my spirit.

What if now, more than ever, we begin to tune our mental dial, as if it were a radio, so that when the mind begins its broken record loop of the-I’m-not-worthy-message; the he-said-she-said banter; the if-only-I-had/did-that-then-everything-would-be-perfect scenario; the what-if-this-happens, then what-will-I-do vignette; the if-only-my-life-were-more-like-this-person-or-that person story; or, any other of the other negative mental dialogue in which we sometimes engage, we instead, choose to dial up another station–like one does with a car radio.  We try tuning-in to another way of thinking/talking to self–choosing thoughts and words that are more positive, encouraging, or at the very least, begin to accept and acknowledge, with great tenderness, our worries and concerns. Then, maybe, with continued practice, we could then begin to raise our inner antennae, our heart, to its highest vibration–one that is more compassionate, empathetic, and authentic.

As I write these words, I fully recognize and know first hand that  COVID-19 has pushed many people to the edge. I think about loved ones, friends, and acquaintances who have lost jobs and their source of income; those who have been exposed to COVID-19 or who are daily at risk for exposure; there are those who are quarantined by themselves–not even with a pet for a companion; there are those who are elderly, frail, sick, fighting cancer or other debilitating disease who can no longer shop for themselves and are dealing with heavens-known-what physical, mental, and/or emotional challenges; and, well, my list can go . . .  People are hurting, and my heart aches for these dear, distressed souls.

On the other side, I have witnessed the way in which this crisis has inspired people to transmit good, to offer themselves in service, in kindness, and in generating positivity.  These hopeful actions inspire me to keep writing, keep encouraging, and keep focusing on the good. Don’t get me wrong, Dear Reader, like many of you, I have moments where I simply sit and cry–acknowledging and feeling the pain, the loss, the fear, the anguish, the stress, and the worries of so many beloved ones. Eventually, however, I turn my proverbial inner dial and switch-off the so-called sorrow station in my head and focus on what I can do.

Cultivating and disciplining our inner channel is never easy. Wallowing in our sorrow can feel like the easiest choice, the clearest transmission, if you will.  However, we can change the station–the inner narrative–at any time. We can choose to focus on at least one positive thing per day; find at least one thing for which to be grateful; and, reach out to at least one person outside of our home–especially those in most need of our love and attention.

Let us seek, discover, and tune in more frequently to positive words, readings, conversations, and, well, even songs.  Let us uplift others as well as our own self. In the words of my daughter–words that she carefully painted on the grass of our yard–let us, “Spread love not germs.”  And, while we’re at it, let us remember to likewise transmit a good dose of self-compassion and self-love.

Like tuning into a radio station on that old transistor radio took time and patience, so too can we learn, with time, to sensitively transmit at a higher frequency for the greater good of self and others.  In the words of the Scottish author, poet, and writer, George MacDonald, “If instead of a gem, or even a flower, we should cast the gift of a loving thought into the heart of a friend, that would giving as the angels would give.”

May we learn to give as the angels would give. 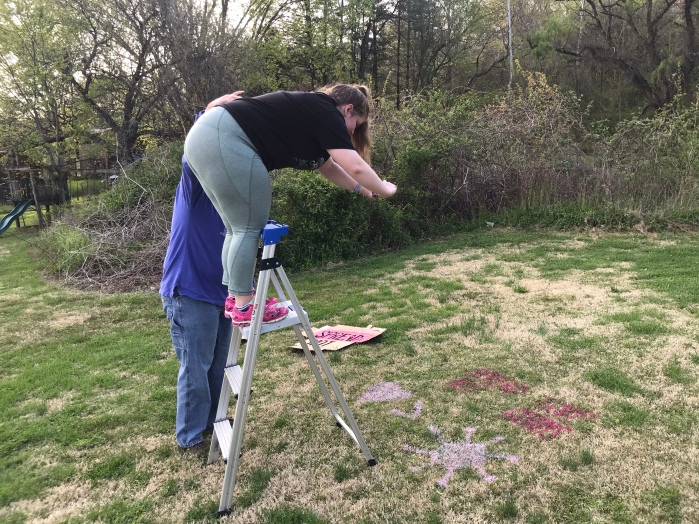 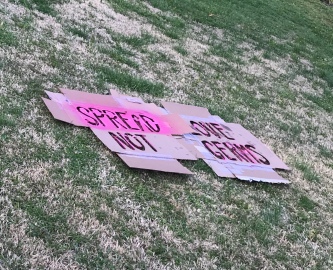 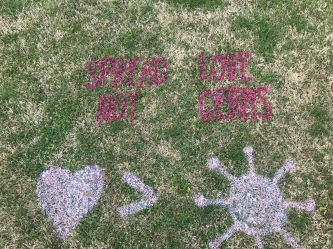