“I just can’t pass the scones up if they’re there. They’re soft and light and a little bit salty.  Sometimes I dream about them.”–Rainbow Rowell

“I remind my American readers that biscuits in England and Australia are crispy and flat things such as you call cookies, and the soft doughy things you call biscuits are what we call scones.  And they say we speak the same language . . .”–Kerry Greenwood

I owe much gratitude for this recipe, the research that went into it, and everything I learned as a result of it to Jacki and Tony Humphreys, both of whom are wonderful cooks and greatly loved family!  For as long as I have known them, they’ve loved the art of cooking and the gathering that often goes with it. I’m fortunate to have been, and continue to be, raised, influenced, and surrounded by family, on all sides, who love to cook.

In particular, I love to bake. Cookies, cakes, muffins, and bread are some of my favorite things to create, but I’ve dabbled in other forms of baking, but never scones.  I suppose I could count the times that I made biscuits from scratch–which are supposed to be similar to scones– but, trust me, I would not be able to tick off all five fingers on one hand for the number of times I baked biscuits, and that was years ago!

Scones just sounded intimidated, but what I came to find, thanks to Jacki and Tony, is that I actually enjoyed baking them a bit better than made-from-scratch biscuits.  Perhaps, it is because, at least for this recipe, scones require less precision than biscuits. Then again, mounding the dough into two circular blobs was certainly entertaining, and the aromatic scent of this recipe throughout the process was likewise pleasant.  Whatever the reason, while I wouldn’t call this a simple recipe, it certainly wasn’t overly complicated either.

When Jacki and Tony first gave me a box of gluten free, plain scone mix, I set it on the counter for a week, looking at it as it stood erect, menacingly communicating that only real experts can make these, and I was a complete a total baking fraud–which is sort of true–I am NOT by any means, a professional baker.  As the days passed, I would occasionally pick up the box, read the directions, put it down again, and walk away feeling a knot in my stomach. Why was I letting this inanimate object unnerve me? 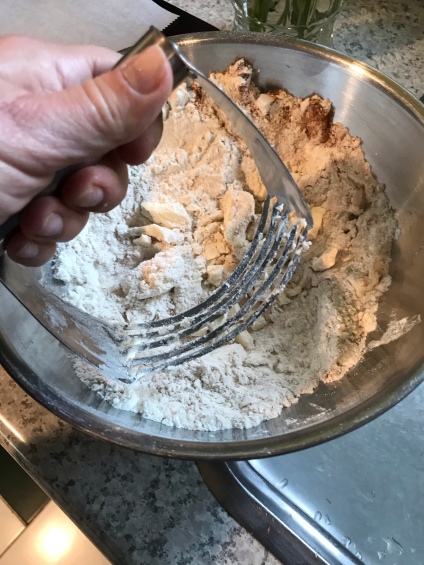 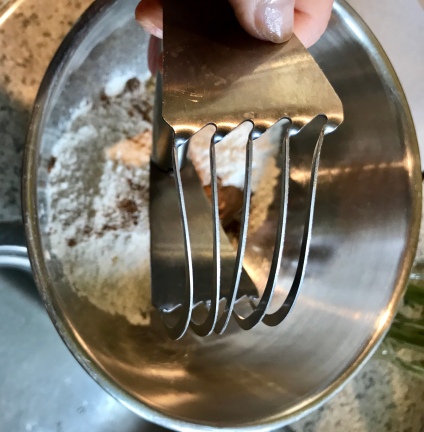 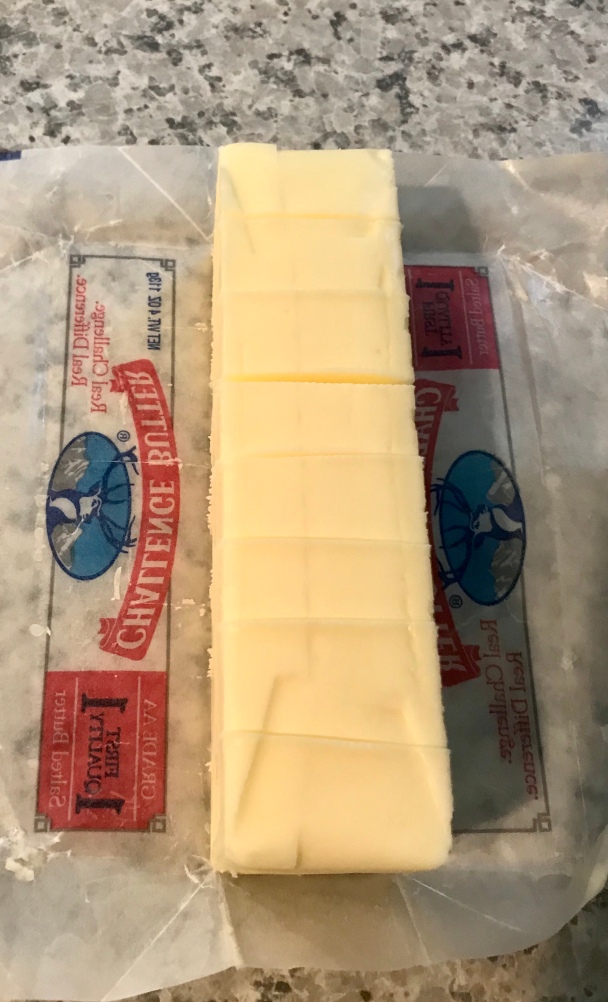 Knowledge is power, right? Right.  Or so I told myself at the end of the week when I decided to dive into the world of Google in order to discover all that there is to know about making scones.  Ok, ok, maybe not ALL, not even close, but I certainly read several educational and informative pieces on scone-baking. Much to my delight, the scone recipes that most resonated with me did not require kneading; and furthermore, when cutting the butter into the flour mixture, the butter did not have to be evenly crumbled.  In fact, large chunks of butter were permitted. Baking scones might be doable after all!

Rolling up my proverbial sleeves, I decided that it was time to play.  What’s the worst that could happen? If I messed up, and the scones were a total flop, then I would have plenty of freshly baked scone scraps to feed the birds.  While I don’t particularly like wasting perfectly good ingredients, it certainly wouldn’t be the first time I had fed the birds the flopped results of a well-intended recipe! 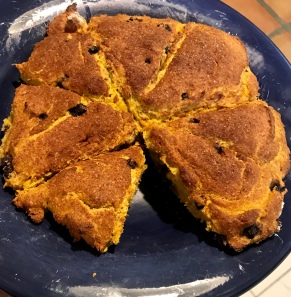 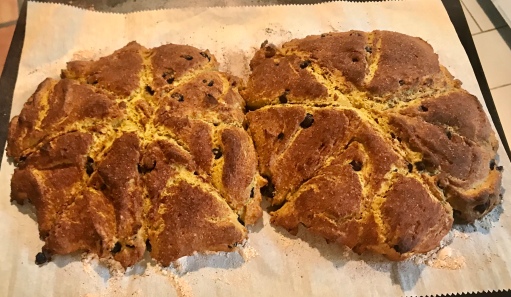 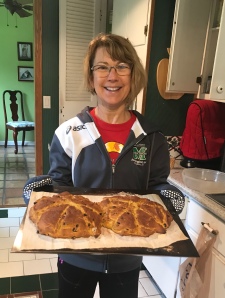 In the end, I cobbled together this recipe that I share with you today.  My husband, John, and my daughter, Madelyn, were my official taste-testers.  Both were surprised by the texture, at least for this variation, was more like muffin–albeit less sweet.  Maddie, who suggested the pumpkin/blueberry flavor combination, observed that the scones weren’t super sweet, so she tried topping them with pure maple syrup, honey, and even whipped cream.  John, slathered them with butter, and he further suggested that a vanilla glaze drizzled on top might be a nice addition for those wanting to sweeten up this recipe a bit. Meanwhile, I was greatly relieved that I didn’t have to feed the local bird population!

Give this recipe a try when you’re hankering to bake something different.  It makes a nice addition to breakfast that would be especially tasty served with some fresh fruit and yogurt, or it makes a nice dessert or snack for later in the day.  And, for those of you like me who need a gluten-free option, the great thing about baking scones is that you simply replace all the purpose flour with a gluten free variation, and everything else about the recipe stays the same, unlike other bread recipes I’ve made.

From my home to yours, I wish you happy, healthy, and homemade meals and treats! 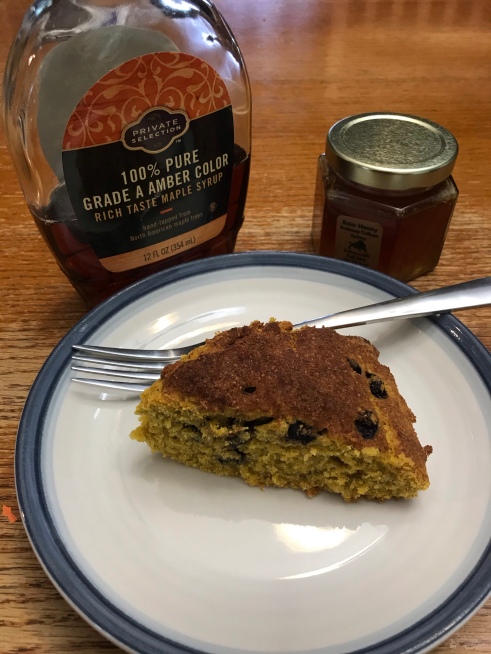 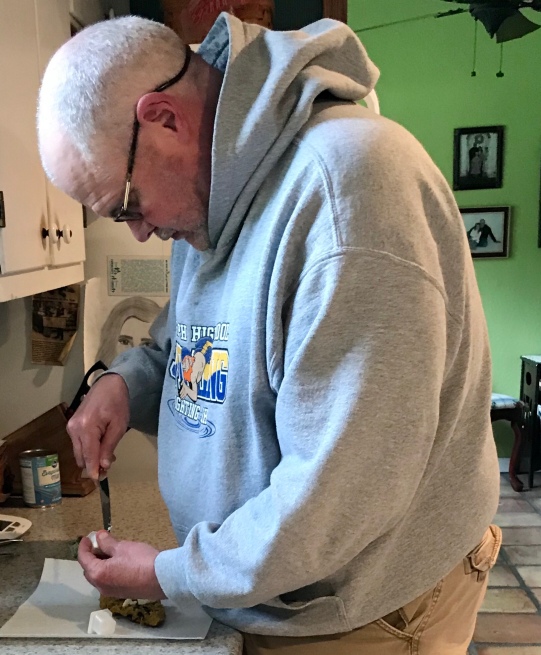 ¼ cup plain or vanilla yogurt (Can substitute milk with a teaspoon of vinegar or lemon juice added, allowing it to sit for 3 minutes before adding to the recipe.)

1 cup blueberries, if frozen thaw in colander to allow liquid to drain off

Line a baking sheet with parchment paper, if you don’t have parchment you can simply grease the pan.

Using a pastry cutter,*** work in the sliced butter until it is crumbly.  This process is very forgiving because it doesn’t have to be evenly crumbly, and large butter chunks are ok!

Add pumpkin mixture to dry ingredients until everything is incorporated, then gently fold in blueberries.

Sprinkle parchment lined (or greased) baking sheet with a bit of flour.

Scrape the dough from the bowl onto the baking sheet, (the dough will be a bit sticky), immediately divide in half, and form two flattened circles about ¾” inch thick.

Brush with milk if desired and sprinkle with cinnamon sugar or sparkling white sugar.

Using a knife that’s been run under cold water, slice each circle into 6-8 even wedges.

Then, I know this sounds crazy, but I promise this works, set the pan in your freezer for 30 minutes.

Preheat the oven to 425 degrees while the dough is in the freezer.

Bake 22-25 minutes until a toothpick comes out clean when inserted into the middle.  (If using gluten-free flour, baking sometimes takes longer, so monitor carefully. This should not come out of the oven wet or doughy.)

Serve warm, and store leftovers in an airtight container (or zippered bag) in the fridge.

Rewarm leftovers in the microwave or stove for a few moments before serving.

These kept nicely for a week in our fridge.

Makes 12-16, depending upon how you cut the circles of dough.

My daughter and I found this was delicious served with pure maple syrup as well as honey, while my husband topped it with butter.  Additionally, my daughter also topped the scones with whipped cream.

*You can also use a scone baking mix–which should have the flour, sugar, baking powder, and salt.  Just check the ingredients list first to ensure it does.

**If you don’t have cinnamon, ginger, nutmeg, and allspice, you can simply use 1 ½ teaspoon of pumpkin pie spice.

***If you don’t have a pastry cutter, you can use a food processor (but don’t over overwork dough), two butter knives, a sturdy fork, or you can even use a box grater and grate the very cold (or even frozen) butter into flour mixture, making it easier to cut into mixture with forks or knives.