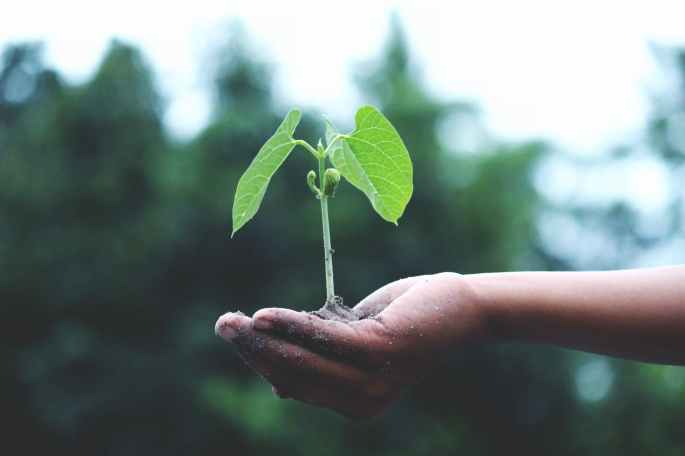 “A tree is known by its fruit; a man by his deeds.  A good deed is never lost; he who sows courtesy reaps friendship, and he who plants kindness gathers love.”–Saint Basil

“Good Morning!” I say to people I pass along the path of my morning run.   Typically, my greeting is echoed back.   Occasionally, I will encounter someone who is busy talking on the phone. Likewise, there are a few who appear to ignore my greeting, but perhaps they don’t hear me, aren’t a morning person, or they are having a bad moment–at least they aren’t, per se, rude.

One particularly hot and humid morning, I observed a young couple running ahead of me, but when they took a walking break, I happened to pass by them.  I warned them that I was, “passing on the left,” as a courtesy in case they did not hear my approach and also to encourage social distancing.  As they moved over to allow me to proceed, I thanked them and wished them a good day.

“Thanks! You’re looking strong, by the way! Keep it up,” was the female’s response.

Now, if there was one thing I was NOT feeling at that moment was “strong.”  In fact, I am fairly certain that strong was not on the spectrum of emotions I was experiencing at the time.  Regardless, her kindness was enough to plant a tiny seed of positivity into my morning exercise and offered a nice boost of energy that was much appreciated.  Since then, this young woman’s random act of encouragement has remained with me, reminding me of the importance of taking time to offer a smile, kind word, or gesture to others with whom I come into contact–especially in the age of COVID.

“A single act of kindness throws out roots in all directions and the roots spring up and make new trees.”–Amelia Earhart

In direct contrast, on another muggy morning, I was making my way along the path, dodging and side-stepping mud, puddles, and oozy sections that looked like an invitation, at least for me, to fall or wrench a limb.  The grass alongside the path was especially slick with moisture because the previous evening had been filled with numerous downpours.  Most pedestrians were following an unspoken courtesy of passing one another at a socially appropriate distance without forcing anyone off into the sopping turf bordering the path.   This sometimes meant pausing, slowing down, or jogging in place behind someone in order to let another person advance from the opposite direction.  Certainly, it might temporarily slow down one’s pace, but if you were really in that big of a hurry, you could choose to step off into the wet grass–and I certainly saw a few faster runners make this decision.

I was approaching an older couple from behind as I continued along the path. I slowed down and moved to the outer edge of the path on my right as there was also a group of three women walking towards the couple from the opposite direction.  The three women formed a single file line, moving to the opposite edge, preparing to go by the couple, leaving plenty of safe space.  The man in front of me moved behind his female companion, so I jogged in place at a respectable distance behind the pair to allow the three ladies to progress by before I passed the couple.

Suddenly, from behind me, I heard the pounding of footsteps and someone huffing swear words under his breath loud enough for all of us to hear.  As I turned my head in his direction, I instantly recognized the cursing man.  When I had previously passed him earlier in my workout, he did not acknowledge my morning greeting.  In fact, having encountered him on a number of previous occasions along the same path, he has never once acknowledged my greeting.  Still, I had written off those encounters to the fact he was a focused runner, despite the fact that his running companion, who was currently at a significant distance behind the cursing man, always spoke.

Meanwhile, the three women continued walking past the couple in front of me, and the huffy man drew up beside me at an uncomfortable closeness, barely leaving enough space for the women to pass at a safe distance.  He looked down at his watch, uttered more harsh swear words, and then quickly dashed between the last woman in line and the couple in front of me, nearly knocking down the woman and startling the older gentleman.  Meanwhile, his companion froze in place and appeared to look at the fast trotting man with a mix of bewilderment and resentment.  Afterwards, for what seemed like a long moment, though it was probably only mere seconds, the six of us glanced from one person to another as if collectively trying to recover from the near collision caused by the man’s aggressive and angry energy that was still hovering in the air as if he had run a red traffic light and escaped, but we were left with the wreckage of his actions

“We all have the right to be here,” I impulsively blurted out to no one in particular.

The three women nodded in agreement and added a few choice comments.

“Well, I hope you guys have a good day anyway,” I added as a moment of closure hoping to bring about a more positive tone.  However, I wondered if my words sounded hollow like attempting to give a child a lollipop after they have been given a vaccination shot.

Reflecting on my statement later, I realized the depth of what I had said, “We ALL have the right to share the path”–even cursing, impatient runners.  Oh, boy!

We live in a finite space called Earth in the community of our collective humanity.  Currently, around the globe, we are faced with issues, problems, and crises–the likes of which most of us have not experienced in our lifetimes. Meanwhile, we have those, like the female runner, offering up encouragement to others in spite of his or her weariness; and, there are still others, like the antagonistic runner, pushing aside those who get in the way of his or her wants/desires.

If I am to be honest, I have regrettably behaved like the cursing runner, so I do not want to pretend to be something that I am not.  However, both of these recent encounters have served as a reminder and object lesson to me.  First, every person has the right to share the path, aka, Earth–even those with whom whose actions I find aversion.  Secondly, I can only control my actions and my words–not others.  Finally, I have a choice, each day–and really, each moment, to decide what my actions, my responses, and my words will foster; and, so do you, Dear Reader.

“Kind hearts are the gardens.  Kind thoughts are the roots.  Kind words are the blossoms.  Kind deeds are the fruits.”–Kirpal Singh

Sometimes plants sprout through the soil that were not intentionally planted.  They seem to grow by some unseen magical power.  In reality, those plants are caused by seeds floating in the wind, dropped by birds, or inadvertently mixed into compost/fertilizer.  In gardening terms, these surprise flowers and plants are called volunteers.  They are independently defiant, complete, and thriving in the midst of less than ideal circumstances.

Like the unknown female I encountered, her volunteered words planted an unintentional seed of kindness in me, that even now as I write this, continues to grow and blossom.  It was such a small act, but it left me feeling uplifted with a sensation that I desire to pass on to others.

Imagine what could blossom in our world if the winds of thoughtful engagement became the norm?  Picture seeing tolerant words printed, spoken, and displayed on social media with greater frequency than narrow-mindedness?  Envision sympathetic, sensitive, and open-minded gestures and actions mixed more often into dialogue, documents, and declarations than overt or subversive hatred, anger, and aggression?  That is the garden for which I hope to help nurture, one volunteered seed of kindness at a time. What kind of garden will you cultivate?